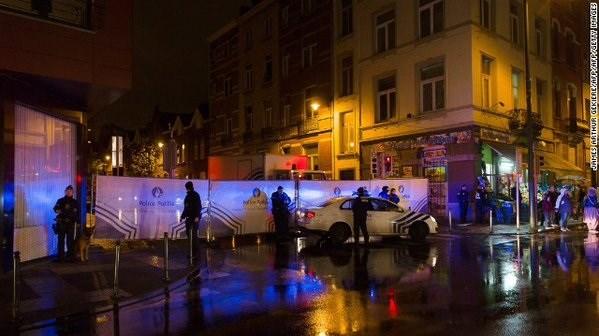 Belgian special operations forces made an arrest during a raid in Molenbeek, a suburb of Brussels, but failed to apprehend Salah Abdeslam, sought by French authorities for a suspected role in the Paris attacks, the Belgian federal justice was quoted as saying by Belgian state broadcaster RTBF.The search for the perpetrators of the Paris attacks has led authorities across the Belgian border to an impoverished suburb of Brussels with a history of links to terror plots.

At least two roads in Molenbeek, a suburb of the Belgian capital, were cordoned off by the police in an active standoff Monday morning, according to the CNN team in the neighborhood.

Police in balaclavas surrounded a building and were using a megaphone to command an occupant to come out, the CNN team reported.Roads were sealed off, with about 70 to 80 police officers on the Rue Delaunoy, CNN staff said. Ambulances and fire brigades were at the ready.

Two of those who attacked Paris on Friday have been identified as French citizens who lived in the Molenbeek district of the Belgian capital, Jean-Pascal Thoreau, a spokesman for the Belgian federal prosecutor, told CNN on Sunday.

Seven people had been arrested in relation to the Paris attacks in raids in Molenbeek, Thoreau said Sunday.

Two cars involved in the Paris shootings had Belgian license plates, according to a statement from the Belgian federal prosecutor's office.

The developments have brought renewed focus on the threat posed by jihadist networks in Belgium, a country which, according to one analysis, has exported more jihadists to the conflicts in Syria and Iraq per capita than any other Western European nation.

According to figures released by the International Center for the Study of Radicalization and Political Violence in January, an estimated 440 Belgians had taken up arms for Sunni extremist groups in the Middle East, a per capita figure about double that of France, and four times that of the UK.Molenbeek has a large, predominantly Muslim population of first-, second- and third-generation immigrants from North Africa that has gained an unwelcome reputation as a hotbed of jihadism.

In January, police raided a suspected ISIS terror cell in Verviers in eastern Belgium, killing two men who were alleged to be on the brink of a major Paris-style attack.

The cell members, including the man alleged to be orchestrating the plot from abroad, Belgian-Moroccan Abelhamid Abaaoud, all hailed from the Molenbeek areaand were suspected to be ISIS veterans who had returned from fighting in Syria, according to a counterterrorism official.

Police found automatic weapons, police uniforms and chemicals to make TATP, the powerful explosive that the Paris attackers also used Friday.Two houses in the suburb were also raided after Ayoub El Khazzani, a Moroccan national, opened fire with a Kalashnikov on a high-speed train from Paris to Amsterdam in August. The prosecutor's office said he had spent time in Molenbeek in advance of the attack.

The Belgian capital was also the site of atrocities in May 2014 that left four people dead at Belgium's Jewish Museum. Mehdi Nemmouche, a radicalized French citizen who had spent a year in Syria, has been extradited to Belgium, where he awaits trial.

And an arms dealer from the city was arrested for allegedly providing arms to Amedy Coulibaly, theISIS sympathizer who attacked a Paris kosher supermarket in January.Molenbeek Mayor Francoise Schepmans told CNN after January's Verviers raids that the suburb was aware of the problems it faced with a cocktail of high unemployment among youths, disaffected young Muslims and jihadist propaganda.In February, a Belgian court convicted the leader of the Islamist group Sharia4Belgium and several followers on terror charges of sending jihadist fighters to Syria. The offenses were committed in Brussels, Antwerp, Syria and Turkey.

"There are several people who left here to fight in Syria. And some who came back. That's the danger," Schepmans said.

Abaaoud, who authorities suspect orchestrated the Verviers plot from Greece, is believed to have joined ISIS in Syria in early 2014, Guy Van Vlierden, editor of a blog on Belgian foreign fighters, told CNN this year. At some point, his 13-year-old brother joined him there, becoming the youngest Belgian jihadist in Syria.

After the Verviers plot was foiled, Abaaoud evaded European authorities' efforts to apprehend him. He later was featured in an ISIS propaganda magazine, claiming to have returned to Syria.In an interview with CNN terrorism analyst Paul Cruickshank in August, Alain Grignard, a senior member of the counterterror unit in the Brussels federal police and a lecturer on political Islam at the University of Liege, said the perpetrators of the Verviers plot fitted a typical profile of Belgian jihadists: "men in their early twenties mostly from the Molenbeek district of Brussels moving in circles with a track record of delinquency and petty crime."

"They were radicalized very quickly, and when they came back from Syria they had no fear of death," Grignard said in the interview, published in the Combating Terrorism Center's publication, the CTC Sentinel. Cruickshank is also editor-in-chief of the CTC Sentinel.

"These guys had maybe more experience in gunbattles than our own commandos."

Like many European jihadists, they were an outgrowth of the "inner-city gang phenomenon," he said, who had already revolted against Western society through petty crime and delinquency before having their antisocial approach "legitimized" by a radical strain of Islam."These youngsters are getting quickly and completely sucked in. The next thing they know they're in Syria and in a real video game," he said.

He told Cruickshank that the terror threat in Belgium, fueled by the trail of young jihadists to fight in Syria and Iraq, had "never been higher in all the years I've been working on counterterrorism."

"To give you an idea of the scale of the challenge, in the past two years we've charged more people with terrorism offenses than in the 30 years before that," he said. "It's impossible to do surveillance on everybody."

Since 2012, he said, al Qaeda had been "trying to talent spot" Western jihadists on the battlefields of Syria for use in potential operations against the West, while ISIS had appeared more focused on state building. But since the start of the U.S.-led air campaign targeting ISIS, the concern had grown that ISIS would also focus on directly targeting Western countries.

"And the worry is that competition between al Qaeda and the Islamic State will see both groups try to outdo each other with attacks in the West," he said.