Police say Waukesha prank wars are getting out of hand 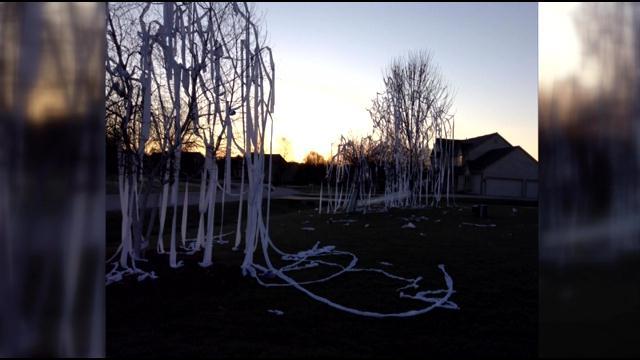 Waukesha Police say the prank wars have been picking up over the past few years around this time, and say it's starting to get out of hand.

Laura Daniels describes how her home looked a week ago along Shadow Ridge Drive, and it's taking some time to clean everything up.

\"There was toilet paper all over our trees, saran wrap between trees, wrapped around an old TV, and also garbage thrown all over the yard”, said Laura Daniels. \"For us it was alright, because nothing was done damaging to our house. So we weren't really too upset, we just sent our son out, every day has been coming home early cleaning and slowly cleaning everything up.\"

Police say the pranks are between juniors and seniors at local high schools in Waukesha. But the prank wars went to another level on Rivers Crossing Drive. Not only did the trees get toilet-papered at one house, but shaving cream was found on the bushes, syrup and ketchup poured on the sidewalk, and salt and bird seeds were scattered on the grass. The owner of that home did not take pictures of the initial damage, and did not want to speak on camera.

Lt. Joe Hendricks with the Waukesha Police Department says if a prankster is caught in the act, they could be charged with disorderly conduct.

\"Don't cross that line where you can become criminal and you can have consequences for the rest of your life”, said Lt. Joe Hendricks. “Again getting a job, getting into college these are things that could come back to haunt them.\"

\"They can have fun, but don't push the envelope too much, you know”, said Daniels. “I know our son had wanted to go out but we said not to, and he was fine with it.\"

To help solve the problem, residents will see more police patrols during the overnight hours when the prank wars are happening.