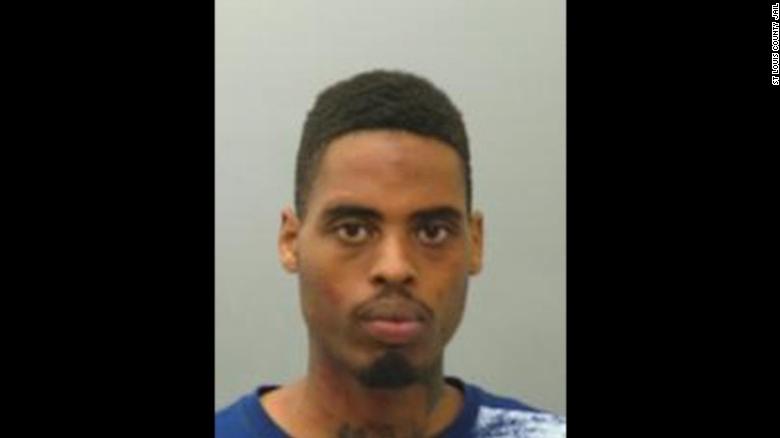 (CNN) A 20-year-old man from the St. Louis area has been arrested in connection with the shooting of two police officers during last week's protests in Ferguson, Missouri, a prosecutor said Sunday.

Jeffrey Williams was arrested late Saturday, and he has been charged with two counts of first-degree assault, a count of firing a weapon from a vehicle and three counts of armed criminal activity, St. Louis County Prosecuting Attorney Bob McCulloch said at a news conference in Clayton.

\"The demonstrations were pretty much over (when the officers were shot). People were leaving, and that's when this happened,\" he said, describing Williams as a demonstrator who had taken part in protests on numerous occasions.

At the time of his arrest, Williams was on probation for receiving stolen property, and McCulloch said he believed Williams had an outstanding warrant after not reporting to his probation officer for several months.

The prosecutor repeatedly thanked the public for the information that led to the arrest. He also said that, because of the public's assistance in the case, police were able to serve a search warrant on Williams' residence where they seized a .40-caliber handgun, \"which has been tied to the shell casings that were recovered\" at the scene of the shooting.

Williams is being held on a cash-only $300,000 bond, McCulloch said, adding that it's possible Williams could face more charges and that others could be charged in the case.

One element of the case that authorities have yet to sort out is intent, McCulloch said, adding that Williams has acknowledged firing the shots but has said he wasn't aiming at the policemen.

Investigators are not sure they \"buy\" Williams' claim that he opened fire after a dispute with other individuals, McCulloch said, but he didn't rule it out.

\"It's possible he was firing at someone else,\" he said, urging any other witnesses with information to come forward.

The shootings occurred Wednesday night. The shots rang out from a hill overlooking the city's police station shortly after midnight Wednesday, at the end of a protest against the Ferguson Police Department, St. Louis County Police Chief Jon Belmar said at the time.

\"We could have buried two police officers,\" Belmar told reporters last week. \"I feel very confident that whoever did this ... came there for whatever nefarious reason that it was.\"

Public donations poured in to be used toward a reward to find the gunman and any accomplices, Belmar said.

Authorities offered a $10,000 reward for information leading to the arrest of person or persons responsible for the gunfire upon the two officers, according to the St. Louis Regional CrimeStoppers website.

McCulloch said the tipster whose information led to Williams' arrest is eligible to receive the reward. He declined to provide any information on the tipster or the nature of the tip.

Protesters said they had nothing to do with the shooting, saying the demonstrators believe in nonviolence.

\"As the protest was dying down, someone, somewhere got violent. Now who they were and what group they were affiliated with, we don't know,\" said Antonio French, a St. Louis alderman. \"In no way are they representative of the thousands of people ... who have been protesting.\"

Belmar believes someone targeted the police, who have faced heated criticism for months, he said.

The department has been under fire since one of its officers, Darren Wilson, shot and killed African-American teen Michael Brown in August, and more recently since a scathing U.S. Department of Justice report documented a pattern of racial discrimination. Police Chief Thomas Jackson resigned Wednesday.

While the demonstrators' focus was Ferguson, neither of the wounded officers works for that police department.

One is from Webster Groves, a St. Louis suburb 13 miles south of Ferguson. The officer -- a 32-year-old with seven years' experience -- was shot at the high point of his cheek, just under his right eye, Belmar said.

The other was hit in the shoulder and the bullet came out the middle of his back, Belmar said. He is a 41-year-old officer with the St. Louis County Police Department, who has been in law enforcement for 14 years.

Both men were treated and released.