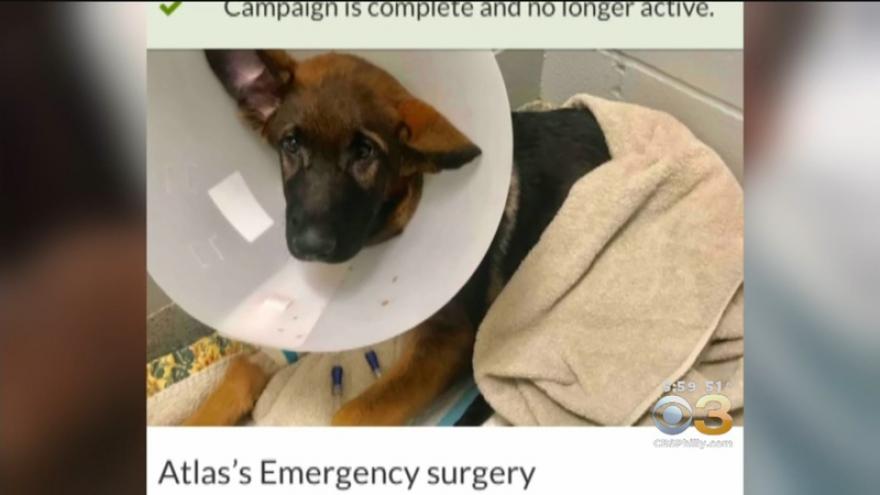 MEDFORD TOWNSHIP, N.J. (CBS) — A Medford Township man is accused of killing his dog and collecting nearly $15,000 in donations has been charged with third-degree animal cruelty and third-degree theft by deception.

Medford Township police say 24-year-old Reid Herjo abused his young dog on a number of separate occasions and then set up a GoFundMe account in order to raise money for the dog’s veterinary bills.

In late January, police pulled over Herjo for speeding. At the time, Herjo told police that he was taking his 14-week-old German Shepherd puppy named Atlas to the veterinary hospital. Herjo alleged that the puppy had been hit by an ATV.

Later that week, Medford Township police were told that the injuries that Atlas sustained were not consistent with the event Herjo had alleged.

“Doing some research and looking into it, it was determined the dog’s injuries were not consistent with what was being alleged to have occurred and there was potential that the dog may have been beaten,” said Lt. Arthur Waterman with the Medford Township Police Department.

Atlas’ injuries were severe and consisted of numerous fractures, requiring surgical repair, as well as hemorrhaging.

Police also found that in the six weeks that Herjo owned Atlas, the puppy sustained injuries on two other occasions.

When questioned by police, Herjo reported that Atlas fell down stairs in December and then fell down a hill in January.

On Feb. 3, Atlas died under suspicious circumstances while in Herjo’s care, according to authorities.

Police say Herjo had set up a GoFundMe account under false pretenses and indicated that Atlas had sustained the injuries when he and Atlas were involved in a hit-and-run motor vehicle crash.

The account raised $14,065 by 693 separate donations over a 28-day period. GoFundMe says that those who donated will receive a refund.

“This user has violated GoFundMe’s terms of service, and all donors will receive a refund. Additionally, this user has been banned from our platform,” GoFundMe said in a statement.

GoFundMe added that they are working with law enforcement on their investigation.

“I hope he gives those people back their money. I mean 693 people over a vet bill. What a con!” said Jeff Singer, one of Herjo’s neighbors.

Herjo has been charged with animal cruelty and theft.