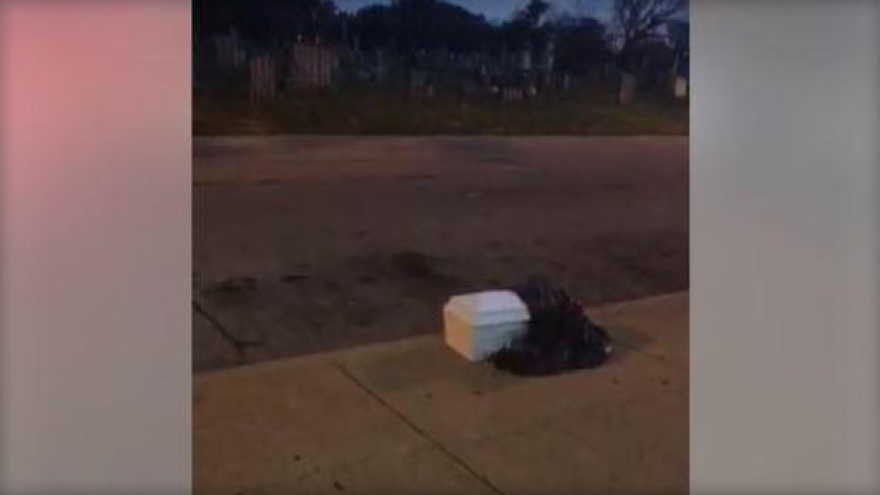 PHILADELPHIA -- Police in Philadelphia are investigating after they say they discovered human organs in a bag in an infant's casket that had been abandoned, reports CBS Philadelphia.

A group of people walking on a North Philadelphia street came across the casket around 9 p.m. Monday, lying on a sidewalk across the street from a cemetery.

"I was pretty shocked," witness Chris James told the station. "It looked like something straight out of 'Thriller.'"

James told the station the group didn't open the casket but instead contacted authorities.

James described the coffin to Philly.com as a "small casket wrapped in a trash bag," and when officers opened it, James said they found a black plastic bag with dirt and "something organic" inside.

Philly.com reports investigators don't know where the remains came from.

"According to the medical examiner, [they] were in fact human organs. They believed they belonged to an infant or a child," Chief Inspector Scott Small told CBS Philly. "What's unusual is inside the coffin, other than the bag of organs, there was no body."

Small said the casket was "fresh" and recently pried open. Investigators are looking into whether someone stole it from an area funeral home or if it was dug up from a cemetery, including Mt. Vernon directly across the street from where the casket was found.

Investigators will search that cemetery and others to determine whether any graves appear disturbed, CBS Philly reports.

Police have not singled out suspects or determined a motive.

"There have been cases where people take remains or human bodies for whatever unusual reasons they decide, but we're going to look into that," Small told CBS Philly.

The Office of the Medical Examiner now has the casket and the organs for further investigation, the station reports.