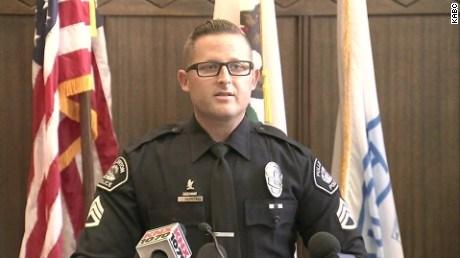 (CNN) -- Authorities have found a 17-year-old girl who went missing after police recovered three bodies at the home where she lived in Southern California.

He noted that a 17-year-old female was also in custody facing murder charges, but declined to identify her because of her age under state law.

It was unclear whether she was the same girl as the one in custody. One of the suspects arrested is believed to have some sort of relationship with her, Radus said.

On Saturday, police rushed to a house in Fullerton, which is about 30 miles from Los Angeles, after a child called dispatchers and said her parents had died.

When they arrived, they found two men and one woman dead at the home, police said in a statement. They also found two children, who were unharmed.

The victims were Chistopher Yost 34, Jennifer Goodwill Yost, 39, the mother and stepfather of Katlynn, and William Boucher, 28, a family friend, Radus said.

Authorities determined that a third minor, Yost, lived at the home, but was nowhere to be found.

Radus described the two younger children as Yost's half sisters.

Formal charges will be announced and presented to the district attorney Monday, Radus said.

CNN's Joe Sutton and Tony Marco contributed to this report