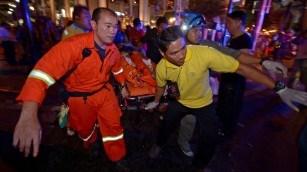 Police were sealing off the scene near the popular Erawan Shrine because a bomb in the area remains active and needs to be defused, police at the scene told CNN.

Bomb squad members in blast suits responded to the area, and an officer announced over a loudspeaker, \"The situation is still not safe. Please all stay back. There might be another bomb in the area.\"

Officials provided no immediate information on casualties, but there were five ambulances in the area. Some local media reported at least five people killed, while the Bangkok Post reported at least 15 deaths.
Steve Herman, a correspondent and bureau chief for Voice of America, said he thought it was thunder when the explosion first ripped through central Bangkok.

He saw six bodies under sheets inside the shrine and one outside of it, he told CNN.

The bomb that detonated just after 7 p.m. was fastened to a utility pole in front of the shrine, and the bomb squad was working to deactivate a second device about 50 minutes after the first blast, the Bangkok Post reported.

The blast didn't cause rampant panic, as some bystanders were milling around peacefully and a family apparently unaware of the explosion was enjoying a meal at a nearby McDonald's, freelance journalist Adam Ramsey told CNN.

Though Buddhism is the predominant religion, there are many Hindu shrines in Bangkok, and the Erawan Shrine is the best known among them, according to an English-language website providing news and tourism information about the country.

The shrine sits at a busy intersection with the city's Skytrain rumbling nearly overhead. Streams of people pay respects from early morning until late at night. Thais and foreign visitors make ceremonial offerings ranging from floral garlands and fruits to teakwood elephants in the hope that their wishes will be fulfilled, according to another tourist site.

Along with many hotels, there also are numerous shopping centers in the area, Google Maps shows, including the Platinum Fashion Mall and Central World, reportedly one of the largest shopping malls in the world.

Schools are out and many in the city were commuting home at the time of the blast, so the explosion at a busy intersection in an area popular with tourists carried the potential for significant casualties.