Police: Dad Left Bullets with Names on Them at Youth Football Field 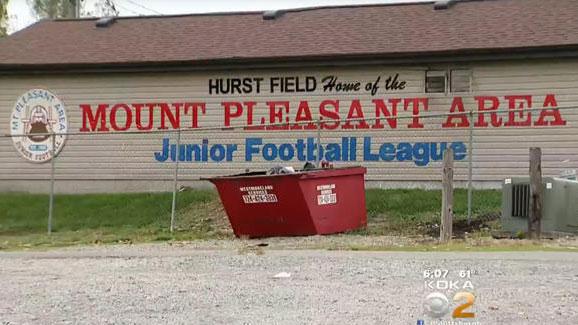 MOUNT PLEASANT, Pa. (CBS NEWS) -- The father of a youth football player and a waitress who worked with him were behind shotgun shells with referees' names written on them that were left on a Pennsylvania field last fall, prompting the league to cancel its season, state police charged Friday.

The shells, which also had names of league officials, were found in October at the gate of the field used by the Mount Pleasant Area Junior Football League, police said. The league, based about 35 miles southeast of Pittsburgh, has several teams grouped by age with players ranging from six to 14.

Joseph Loughner, 51, of Greensburg, and Kimberly Ross, 34, of Connellsville, were charged with conspiracy, terroristic threats and harassment. Ross also wrote threatening letters to a referee at Loughner's urging -- on the back of paper placemats from the restaurant where both worked, police said.

"I wrote a threatening letter, I take full responsibility for that," Loughner told CBS affiliate KDKA Friday. "I back up everything on that letter."

State Police said they did not take the letters lightly.

"These letters are very detailed about the threats and acts of violence," Trooper Stephen Limani told the station.

The first threat letter was an envelope with a joker playing card showing a sinking ship on other side. It also included a red tip wooden match stick. The second letter read, "Now this is a threat, if one more kid gets hurt I will kill you," and "Take it any way you want and to the cops."

Loughner denied he was responsible for the shotgun shells.

"I didn't throw no bullets, that's what ruined the season, get it straight," Loughner said.

Ross told police that Loughner was intimidating and repeatedly asked her to write the letters. She also said Loughner was "very nervous" after the shells were found and the remainder of the season was canceled, according to a criminal complaint.

Loughner had Ross write the letters to a referee in hopes he'd resign and told police he "thought the letters were funny."

Loughner sent the letters because he and other parents had become increasingly unhappy with changes in league administration and rules, and player injuries angered him more, the complaint said.

"Mr. Loughner didn't want them to be in his handwriting, so to throw people off, he used her handwriting and dictated the letters to her," Limani said.

Neither defendant had a defense attorney listed in online court records to speak on their behalf. Both were taken to the Westmoreland County jail after they were each unable to post $25,000 bond.

They face a preliminary hearing March 10.

After the shells were found, an alumni of the league who played in its first game 50 years ago offered a $500 reward to catch whoever was responsible, KDKA reported in October.

"It's a shame because these kids worked hard for two months before the season and then played a couple of games and then this went on to happen," Peter Field told the station.

Police didn't suggest the restaurant in Connellsville was aware of the threats. The woman who answered the restaurant's phone Friday wouldn't say if either suspect still worked there.