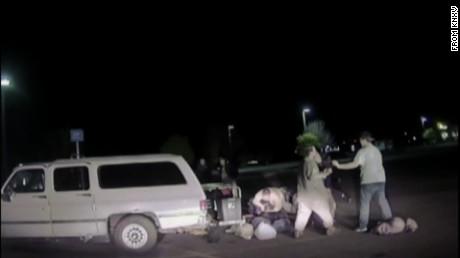 Enoch Gaver, 21, was killed in the fight in the town of Cottonwood, and suspect David Gaver, 28, was shot in the stomach and taken into custody. Police Sergeant Jeremy Daniels was hit in the leg by a bullet fired during the melee.

The police dashcam video, released Friday, shows Cottonwood Police approaching the group of eight people -- all identified as members of the Gaver family -- around a large SUV in a Walmart parking lot on March 21.

Officers wanted to question them about the alleged assault of a Walmart employee who was going into the store bathroom. The police were accompanied by another Walmart employee.

On the video, an officer tells the group that they \"need to separate these folks and talk to them.\" Someone then responds, \"No, you are not going to separate me from my parents,\" and, \"don't touch me.\"

The video then shows a police officer being put in a headlock and knocked to the ground.

The sound of Taser fire is heard. Police say pepper spray was deployed and that at least three shots were fired in an apparent struggle for an officer's gun.

Several times on the video the group appears to surrender, but starts fighting again. The melee goes for several minutes until backup officers arrive and make arrests.

Police charged four members of the family with assaulting an officer and resisting arrest. Two minors were also taken into custody and are being held at a juvenile detention facility.

At least three members of the family are reportedly in a Christian band named \"Matthew 24 Now,\" according to AZCentral.com. They had performed on the streets of Boise, Idaho.
Share this article: