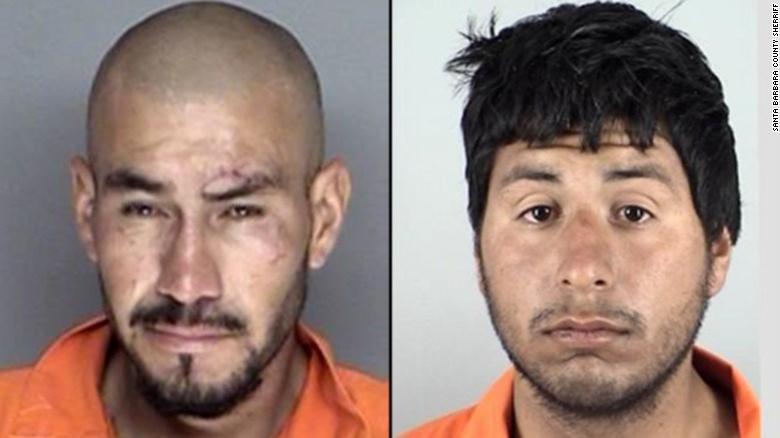 (CNN) -- When a U.S. Air Force veteran died after an undocumented immigrant and another man allegedly sexually assaulted her and beat her with a hammer, a police chief wasted little time blaming top officials of California and the United States.

\"I think it starts in Washington, D.C., with this administration that we see and their policies. I think you can draw a direct line over to Sacramento with the policies of, I'm going to say, this governor and the Legislature,\" Santa Maria Police Chief Ralph Martin told reporters. \"And I am not remiss to say that from Washington, D.C., to Sacramento, there's a blood trail into the bedroom of Marilyn Pharis.\"

Pharis was sleeping at her home just before 10 a.m. on July 24 when Victor Aureliano Martinez, 29, and Jose Fernando Villagomez, 20, allegedly broke into her home and assaulted her, Santa Maria police said in a news release.

The victim called police and when officers arrived, dogs led them to a nearby home where they found Martinez, who had allegedly broken into the home in an attempt to evade police, the statement said. He was arrested without incident and charged with attempted murder, sexual assault and residential burglary, it said.

Villagomez was arrested five days later -- on a probation violation -- and he was charged August 4 in the attack on Pharis, according to police.

Pharis, 64, died in the hospital August 1. Her family said she was \"much loved,\" while her employer -- the Air Force's 50th Space Wing, where she was a civilian contractor -- called her death a \"tragic loss\" in a statement from the commander.

Public defender Lori Pedego's office was closed Sunday, and she couldn't be immediately reached for comment. But last month, Martinez had pleaded not guilty to attempted murder, first-degree burglary with person present, assault with intent to commit rape, sexual penetration by foreign object and resisting a peace officer, according to the Santa Maria Times.

\"These charges carry the possibility of the death penalty or life without possibility of parole,\" Santa Barbara County District Attorney Joyce Dudley told reporters, saying she did not yet know which sentence she would pursue.

Police say Martinez has had numerous run-ins with the law, including an incident shortly before the attack on Pharis.

\"Two weeks before this murder, Santa Maria police officers arrested him for possession of meth, and you know what we had to do? We had to cite him out. That's the problem with this system. This is not just in Santa Maria. This is all over the state of California and all over the United States,\" Martin said.

The chief singled out California's Assembly Bill 109 -- an effort to comply with the U.S. Supreme Court's mandate to reduce the prison populations in state prisons -- and Prop 47, which makes most nonviolent drug and property crimes misdemeanors, as the reasons that Martinez was able to commit the crimes of which he's accused.

Originally from the state of Durango, Mexico, Martinez was in the country illegally, Martin said, and even though he'd been booked in Santa Barbara County at least four times since 2009, local police received no formal requests from federal immigration authorities, Martin said.

The county first booked Martinez on November 19, 2009, for driving without a valid license. He was released 19 days later, police said.

He was picked up again on May 22, 2014, initially for felony drug and sexual assault charges, police said. The assault charge was later modified to misdemeanor battery. U.S. Immigration and Customs Enforcement filed an \"immigration detainer -- notice of action,\" but the sheriff's office determined the request did not meet its \"immigration detention requirements,\" police said. Martinez posted bail and was released June 4.

And during the methamphetamine arrest Martin referenced, Martinez was arrested July 17 on charges of possessing drug paraphernalia and felony possession of a \"concealed dirk or dagger.\" The paraphernalia charge was dismissed, and Martinez pleaded no contest to the weapons charge and the 2014 drug charge.

Though the weapons charge earned him 30 days in jail, which would have begun October 31, Martinez was ordered released on July 20, five days before Pharis was attacked, police said. He was supposed to return to court August 24.

In a statement, ICE said it lodged an immigration detainer on Martinez after the May 2014 incident and asked that ICE \"be notified prior to Mr. Martinez's release to enable the agency to take custody to pursue possible administrative immigration enforcement action. Available records indicate that Mr. Martinez was released by local authorities a week later without ICE receiving the requested notification.\"

The agency did not issue a detainer after his most recent arrest because there were no deportations or felony convictions in his case history, its statement said.

Villagomez, who was born in San Francisco, had been arrested at least twice before he was charged in Pharis' killing. In May, he was charged with misdemeanor drug use and battery, the latter of which was dropped. He pleaded no contest to misdemeanor use/under the influence of a controlled substance, received probation and was released June 17, police said. He was picked up again July 29 on an unspecified probation violation.

In a statement accompanying the timeline of Martinez's and Villagomez's arrests and releases, the sheriff's office said that in response to questions about the suspects' incarceration histories and immigration statuses, it was releasing the suspects' data to set the record straight.

State law, the statement said, dictates when police can detain someone based on a U.S. Immigration and Customs Enforcement detainer request, while a federal court has ruled that placing someone in custody based only on an ICE detainer request may leave a local law enforcement outlet liable for violating that person's constitutional rights.

\"Based upon the constraints created by the above noted laws, it is the policy of the Santa Barbara County Sheriff's Office, that DHS/ICE must obtain a court order or arrest warrant signed by a Federal judge or magistrate, before we will continue to maintain custody of an individual who does not have local charges that require the individual to be held in our custody,\" the statement said

It continued, \"The impact of these two laws causes a significant legal and moral conflict for California Sheriffs when handling ICE immigration detainer requests. It is imperative that the Federal government work to remedy this conflict and provide clear guidance to California Sheriffs.\"

Santa Barbara authorities have received a detainer request for Martinez, but no court order signed by a federal judge, police said in a statement.

ICE said it \"is monitoring the case closely and has lodged a formal request with the custodial law enforcement agency seeking notification in advance of his release or transfer from local custody.\"

In order to deport someone, that person must have committed a \"crime of moral turpitude,\" must have multiple criminal convictions or must be guilty of an aggravated felony, according to federal law.

U.S. immigration policy relating to criminals came under new scrutiny when Juan Francisco Lopez-Sanchez, a felon who had been deported to Mexico five times, was accused of killing Kate Steinle of San Francisco on July 1. Lopez-Sanchez has pleaded not guilty to murder and weapons charges and is being held on $5 million bail.