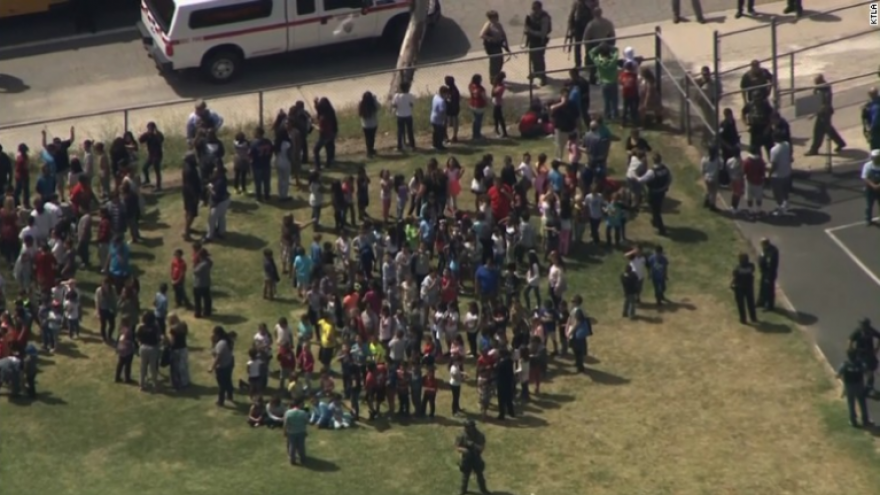 SAN BERNARDINO, Calif. (AP) —  An 8-year-old student has died after being shot in a San Bernardino classroom during what police describe as a murder-suicide.

The suspected gunman, 53-year-old Cedric Anderson, of Riverside, shot his wife, 53-year-old Elaine Smith. She was a teacher in the special-needs classroom for students in first through fourth grades where the shooting took place.

Police say he said nothing and opened fire on his wife with a large-caliber revolver. Two children standing behind Smith were struck by gunfire.

Police identified the boy who died as Jonathan Martinez. Authorities didn't name the other boy who was wounded and is now in stable condition.

Some students are being reunited with their parents after a shooting at an elementary school in San Bernardino.

Video from news helicopters showed lines of young children clapping and giving high-fives as they walked to meet their parents at a nearby high school.

Parents waved and cheered as they greeted their children.

A San Bernardino police official says two children wounded in a shooting at an elementary school were not the targets.

Police Capt. Ron Maass says, \"The children we do not believe were targeted. The suspect had come to the classroom to visit. The adult female was in the classroom.\"

Police did not identify the shooter or the teacher.

The weapon was a handgun, police said.

The two wounded students are in critical condition.

A San Bernardino police spokesman says two wounded students are in critical condition after a shooting at an elementary school.

Authorities have said the suspect and another adult are dead.

The shooting took place in a classroom.

The San Bernardino police chief says two adults are dead after a shooting at an elementary school.

San Bernardino Police Chief Jarrod Burguan says on Twitter that investigators believe \"the suspect is down.\" He says there is no further threat to the school.

Burguan says the shooting is believed to be a murder-suicide.

He said at least two students were taken to a hospital.

A spokeswoman for San Bernardino City Unified school district says one of four people shot in a classroom was a teacher.

Maria Garcia says the shooting is believed to be a domestic dispute.

At least two students have been airlifted to a hospital.

The police chief of San Bernardino says a shooting at an elementary school appears to be a murder-suicide.

San Bernardino Police Chief Jarrod Burguan said on Twitter that there four victims being treated, including at least two students who were taken to a hospital.

He says the shooting happened in a classroom.

The other students in the school were being evacuated and taken to a nearby school.

A fire official says multiple people have been shot at an elementary school in San Bernardino.

Sherwin says numerous firefighters and police officers are headed to the scene.

No further information was immediately available.