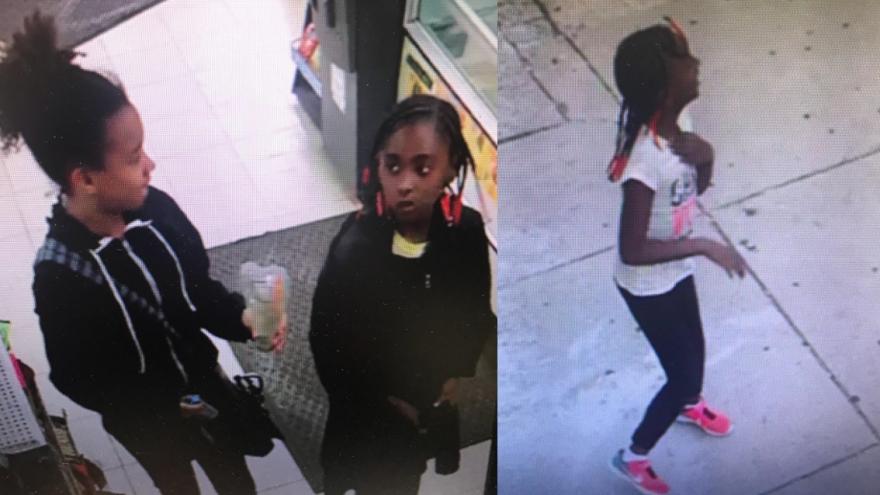 MILWAUKEE (CBS 58) -- Two girls missing since 6 p.m. Saturday have been located according to the Milwaukee Police.

The MPD announced around 12:30 p.m. Sunday that 10-year-old Lenae Bryant and 9-year-old Azarayah Reynolds have been located and are being reunited with their families.

The two were found at a friend's house down the street.

Milwaukee Police say the man in the wheelchair did not have anything to do with the girl's disappearance.

MILWAUKEE (CBS 58) -- Milwaukee Police have released more information on the outfits the girls were wearing. 10-year-old Lenae Bryant was wearing black skinny pants or leggings, a black zip up sweatshirt with a white zipper and stings. Her hair was pulled back. 9-year-old Azarayah Reynolds was a black jacket and black pants.

Before they went missing Saturday evening the girls were seen riding on the back of a motorized wheelchair with an elderly white man in the seat and another white girl who was similar in age the the missing girls.

The man in the wheelchair was wearing a black jacket with a red shirt underneath. The wheelchair may have red trim on the bottom.

The man and three girls were last seen going west on Lincoln Avenue from 18th Street around 6 p.m.

MILWAUKEE (CBS 58) -- The Milwaukee Police are asking for the public's help in finding two young girls who have not been seen since Saturday evening. Ten-year-old Lenae Bryant and nine-year-old Azarayah Reynolds were last seen around 6 PM in the area of S 18th Street and W Hayes Avenue.

Lenae Bryant is a black female, 5-feet,1-inch tall, weighing 80-pounds, with brown eyes and black hair in pigtails. She was wearing a gray t-shirt.

Azarayah Reynolds is a black female, 4-feet, 8-inches tall, weighing 60 pounds with brown eyes and black hair.  Her hair is in braids with red beads.  What she is wearing is unknown.

Anyone who has seen or has information about Lenae Bryant and Azarayah Reynolds is asked to call the Milwaukee Police Sensitive Crimes Division at 414-935-7405.