Police: 2 dead, including gunman, at high school near Seattle 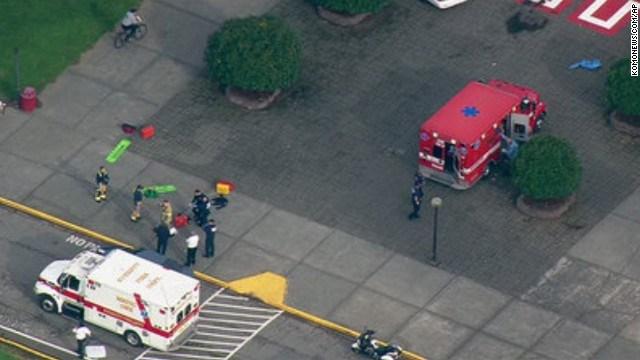 Fryberg was announced as the high school's freshman homecoming king on October 17, according to YouTube video of the ceremony and accounts from students to CNN.

A student at Washington state's Marysville-Pilchuck High School walked into the school's cafeteria, went up to a table with students, \"came up from behind ... and fired about six bullets into the backs of them,\" witness Jordan Luton told CNN. \"They were his friends, so it wasn't just random,\" Luton said.

Authorities \"are confident that there is only one single shooter,\" Marysville police spokesman Robb Lamoureux told reporters.

The shooter -- a student at the school -- and another person are dead, he said.

Two federal law enforcement sources with knowledge of the investigation told CNN that four people have been wounded. Three were critical and one was in serious condition, they said.

Another federal law enforcement official, who also spoke on condition of anonymity, said the shooter died of a self-inflicted gunshot wound.

Authorities first learned about the shooting after getting a 911 phone call around 10:30 a.m. (1:30 p.m. ET) from someone inside the school, Lamoureux said.

\"The Marysville-Pilchuck High School is currently in lockdown due to an emergency situation,\" the school district said in a statement.

\"Police and emergency services have responded. The Marysville School District lock down procedures will remain in effect at Pilchuck until further notice from law enforcement.\"

A student locked down inside a classroom told CNN by phone that the shooting began in the cafeteria.

The student, whose name is being withheld, said when the shooting began students initially thought it was a fire drill until teachers told everyone to run into classrooms because there was a shooting.

At least one person has been airlifted, according to the student.

The student said she was hiding in a classroom with other students, all of whom are unharmed.

A student who says he was in the cafeteria when the shooting began told CNN he called the police, and then gave his phone to a teacher.

The student described a chaotic and bloody scene, saying blood was \"everywhere.\"

He claimed to know the shooter, describing the gunman as a popular student who recently had been the victim of bullying.

Medeana Johnson, mother of a boy who is a junior at the school, told CNN affiliate KIRO-TV that her son said a boy opened fire near the cafeteria. She said her son told her he was supposed to be in the cafeteria but stopped to chat with someone and so didn't go in.