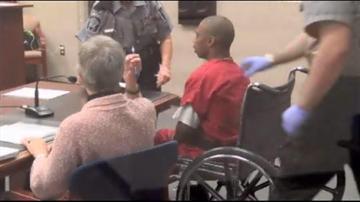 MILWAUKEE -The 28 year old suspect in the Clarke School playground shooting has a prior conviction for second degree reckless homicide.

The fatal shooting happened back in 2003 not to far from the scene of the playground shooting.

The victim in the 2003 case was James Gibbs who was fatally shot at just 17 years old.

CBS 58 News is not identifying the 28 year old defendant because Milwaukee Police tell us they are still in the process of doing a line up and we do not want to hinder the current investigation.

Meantime the other defendant in the shooting that critically injured a 10-year-old  Sierra Guyton engaged in an angry outburst during his first court appearance  Thursday morning.

If convicted, altogether, the charges could send him to prison for more than 57 years and he could be forced to pay a $150,000 fine.

Sitting in a wheelchair, the defendant was pushed into court with three officers by his side.

His attorney, Deborah Patterson, waived the reading of the criminal complaint in court, but we learned from her that Lewis now lives in Evansville, Indiana with an aunt.

Patterson said he moved there when his mom died and was in Milwaukee visiting at the time of the shooting last week near 28th and Clarke.

Sierra Guyton, 10, was caught in the crossfire and continues to have brain swelling after she was struck in the head by a stray bullet.

In the criminal complaint, Lewis admits knowing children were nearby when he began firing his gun until it was empty.

\"The child here was seriously injured. I'm told she's still in the hospital,\" she said. \"There certainly was potential for other injuries. Fortunately no one else was injured, given there was other children and adults on the playground.\"

After the hearing, Lewis became angry, shouting cuss words and shoving papers off the table.

On his way out of the courtroom, he tried to slide out of the wheelchair.

Officers had forcefully pick him and sit him back down.

His preliminary hearing is set for June 6.