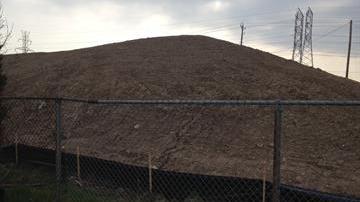 WEST ALLIS - Plans are in the works to beautify a large mound of dirt in the city dubbed by some as \"Mount Stallis.\" The more than 2 story mound sits next to the off ramp of 8-94 at the Greenfield Avenue. The Wisconsin D.O.T. placed excess dirt from the Zoo Interchange re-construction project there. It's been called an eye sore by some and many people have complained about it. West Allis officials and the D.O.T. are working on ideas to make it look better. At this point, grass will be planted and trees will line the east and west sides of the mound. Landscaping beds will also likely be used and there's the possibility community art will be displayed there. Alderman Michael May would also like the mound shaved back about 50 feet from Greenfield Avenue to open the view up from the off ramp. City officials and the D.O.T. will come up with a plan. It's unclear when work may start on the project. For some residents, \"Mount Stallis\" is a good thing because it poses as a sound barrier to the freeway.