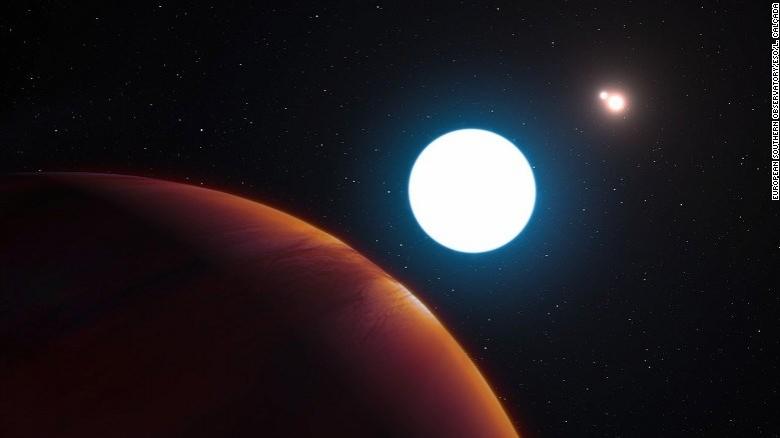 (CNN)Astronomers have discovered a planet with three suns, where an observer would experience either constant daylight or triple sunrises and sunsets depending on the seasons, which last longer than a human lifetime.

The planet, HD 131399Ab, is the first discovered in a stable orbit in a triple-star system; previously, it had been assumed that the unstable gravity would result in any planet being quickly flung out.
"If the planet was further away from the most massive star in the system, it would be kicked out of the system," Daniel Apai of the University of Arizona said in a statement.
"Our computer simulations have shown that this type of orbit can be stable, but if you change things around just a little bit, it can become unstable very quickly."
Kevin Wagner, who discovered the planet and led follow-up observations, said that "for about half of the planet's orbit, which lasts 550 Earth years, three stars are visible in the sky."
"It is not clear how this planet ended up on its wide orbit in this extreme system, and we can't say yet what this means for our broader understanding of the types of planetary systems, but it shows that there is more variety out there than many would have deemed possible."
The planet -- reminiscent of Luke Skywalker's twin-starred homeworld of Tatooine in "Star Wars" -- is located in the Centaurus constellation, about 320 light-years from Earth.
It was found using the SPHERE instrument on the European Southern Observatory's Very Large Telescope, which is sensitive to infrared light, allowing it to detect the heat signatures of young planets.
About 16 million years old, HD 131399Ab is one of the youngest exoplanets discovered to date, the observatory said in a statement.
By comparison, Earth is about 4.5 billion years old.
With an average temperature of about 580 degrees Celsius (1,076 degrees Fahrenheit) and an estimated mass of four Jupiters, it is also one of the coldest and smallest directly imaged exoplanets.
"HD 131399Ab is one of the few exoplanets that have been directly imaged, and it's the first one in such an interesting dynamical configuration," Apai said.
Share this article: