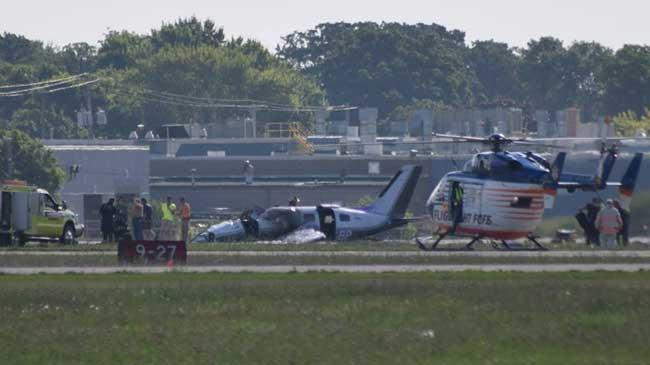 A plane crashed at the Oshkosh Airport this morning, carrying five passengers.

At approximately 7:45 a.m. on Wednesday, July 22, a six-seat Piper Malibu aircraft (N4BP) was landing on the east end of Runway 9/27 at Wittman Regional Airport in Oshkosh, Wisconsin. There were five people aboard the aircraft.

At the time of landing, the airplane crashed on the runway.

Oshkosh Fire Department extracted the fifth person on board.

That person was transported via medevac helicopter to an area hospital.

The NTSB is leading the investigation into the accident.

Over the course of the week long event, about 5,000 private planes will land.

Add to that all of the aircraft pulling off stunts and tricks, it makes for the busiest air control tower in the country.

Air show officials say it could be a constant recipe for disaster and yet it's anything but.

\"Making all this work is really an impressive piece of coordination and choreography,\" said Dick Knapinski, EAA spokesman. \"The FAA works with it. It's an all-star crew. More than 50 air traffic controllers work this event. They are chosen by their supervisors as the best ones to come work the event.\"