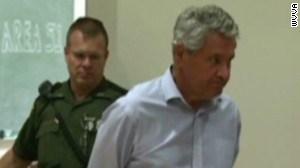 (CNN) -- Part of Robert Ferrante's job had been to manage a laboratory that conducted clinical trials using various drugs and chemicals.

Until he was accused of using one of those substances -- cyanide -- to kill his wife.

On Friday, a Pennsylvania jury determined that this accusation was well founded, convicting the University of Pittsburgh medical researcher and professor of murder in death of 41-year-old Autumn Klein.

As juror Helen Ewing told reporters afterward, \"It was very hard for me to accept and to believe that he could have done it.

\"But I felt that the facts were clear, and I couldn't argue with them.\"

For many on the outside, there seemed little amiss in the lives of Ferrante and Klein. They both had successful careers, including Klein as a top neurologist at the University of Pittsburgh Medical Center. Their house was brightened by Klein's then-6-year-old daughter, Cianna. And they'd just returned from a trip to Puerto Rico.

\"I've never seen anything to suggest they were anything but a happy couple with a beautiful little girl,\" their neighbor Blithe Runsdorf said.

Then, on April 17, 2013, Ferrante called 911 and said his wife was \"conscious and breathing, but not alert\" inside their Pittsburgh home.

When paramedics arrived, they found Klein on the floor of the kitchen with a plastic bag containing creatine.

According to a criminal complaint, several text messages sent between the couple suggest Ferrante urged Klein to try using creatine to get help her get pregnant.

Whatever Ferrante's rationale, there's no scientific consensus that creatine supplements -- which some use to build muscle mass and may have medical value -- help with female fertility; in fact, the National Institutes of Health says pregnant women should not use creatine.

Regardless, authorities say it wasn't the creatine that killed Klein -- but rather cyanide that had been mixed with it.

One day before Klein fell ill, Ferrante had used a credit card to place an overnight order for more than a half-pound of cyanide. At the time the order was placed, there were no active projects at Ferrante's lab that involved the use of cyanide, according to the complaint. And when investigators looked at the bottle, they found that over 8 grams of cyanide were missing from it.

Cyanide is often used in research laboratories for experiments. In humans, in which it interferes with a body's ability to use oxygen to produce energy, it can be deadly.

In July 2013, Ferrante was charged in his late wife's death, arrested in West Virginia, then extradited back to Pennsylvania.

And why did Autumn Klein die?

More than a week after her collapse, after being told that she'd been fatally poisoned with cyanide, Ferrante himself asked detectives, \"Why would she do that to herself?\" A few seconds later, according to the complaint, he added: \"Who would do this to her?\"

Another neighbor of the couple, who asked not to be identified, said it was no secret that Klein wanted another baby. But she told the neighbor's wife Ferrante did not share that desire.

The criminal complaint raises another source of friction: Ferrante confronted his wife three times within weeks of her death about whether or not she was having an affair.

\"Further, evidence has been uncovered that reflects that the victim intended to have a conversation with Ferrante and Ferrante would 'not like the discussion,'\" the complaint adds.

The case lingered for months, before finally going to trial in October.

Dozens of witnesses took the stand, perhaps none more key than Ferrante himself.

His lawyer, Bill Difenderfer, said after the verdict that he thought his client \"did extremely well\" on the stand. \"I thought he was very candid ... and he was telling the truth.\"

Yet, rather than be convinced of his innocence, jurors said that inconsistencies in his testimony played a significant role in their guilty verdict.

Difenderfer said that it's going to take time to review the \"80-plus search warrants, multitudes of evidence (and) terabytes of information\" before deciding on the defense team's next steps, including a possible appeal.

Klein's parents, meanwhile, returned home to care for young Cianna and cherish the memories of the girl's late mother.

\"While we are pleased that the person responsible for Autumn's death has been brought to justice,\" the parents said in a statement, \"nothing will ever fill the emptiness that we feel in our family and in our hearts.\"