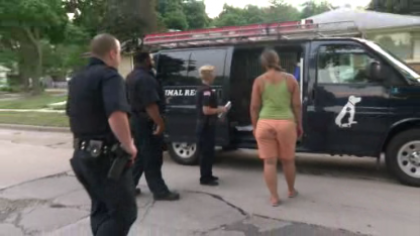 UPDATE: The Milwaukee Police Department is investigating a dog bite complaint that occurred at about 7:30PM in the area of 4900 N. 88th Street.

A group of children were playing outside in the neighborhood when two pit bulls fled from a house when the door was opened. A 14-year-old female was attacked by one of the dogs. The dog’s owner was able to retrieve the dog before the victim received further injuries. The victim was conveyed to a local hospital by Milwaukee Fire Department where she is being treated for multiple dog bites over her body.

Both dogs were recovered by Milwaukee Area Domestic Animal Control Commission and are currently being quarantined.

ORIGINAL: MILWAUKEE - The Milwaukee Fire Department tells CBS 58 News that a child has been taken to Children's Hospital following a dog attack.

The attack happened shortly after 7 p.m. this evening. There is no word yet on the extent of the child's injuries.

MADACC believes two dogs were involved in the attack. The dogs will be kept in quarantine for 10 days. It is then up to the owner to decide if they want them back, otherwise, the dogs will be humanely euthanized and sent to Madison for testing.