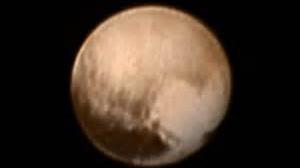 The $720 million mission has been ten years in the making.  I'm told the radio transmission sending the imagery back to earth isn’t at light speed.  It takes 40 minutes to feed back just one, and we won’t have all of them in our possession for 16 months.

“The exploration of Pluto and its moons by New Horizons represents the capstone event to 50 years of planetary exploration by NASA and the United States,\" said NASA Administrator Charles Bolden in a press release. “Once again we have achieved a historic first. The United States is the first nation to reach Pluto, and with this mission has completed the initial survey of our solar system, a remarkable accomplishment that no other nation can match.”

But local astrophysicist, Dr. Chris Stockdale, says it’ll be well worth the wait.

The probe won’t be returning to earth.  It’s heading to the outer edges of the solar system, well beyond the planets.  It’s expected to run on nuclear energy for the next 22 years.

\"Pluto was discovered just 85 years ago by a farmer's son from Kansas, inspired by a visionary from Boston, using a telescope in Flagstaff, Arizona,” said John Grunsfeld, associate administrator for NASA's Science Mission Directorate in Washington. \"Today, science takes a great leap observing the Pluto system up close and flying into a new frontier that will help us better understand the origins of the solar system.”