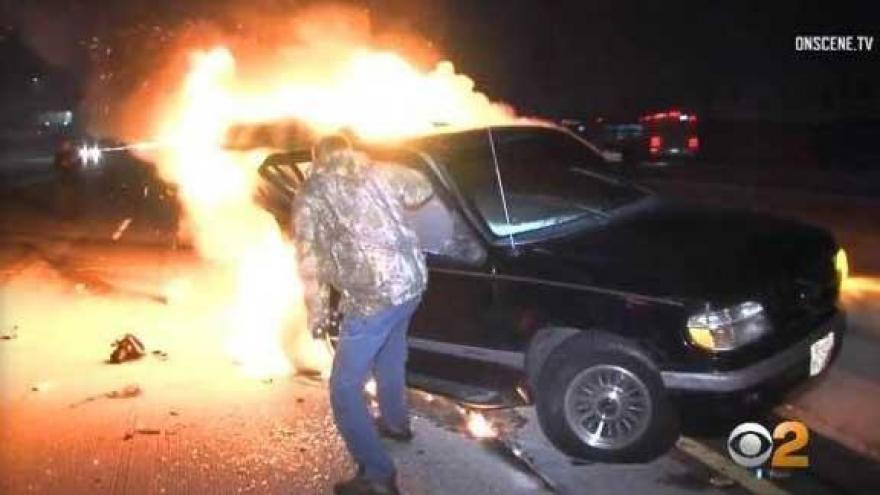 LOS ANGELES (CBS NEWS) – A fiery crash on the 110 Freeway in Los Angeles on Sunday morning left a driver unconscious and trapped and likely to die.

Fortunately for that driver, a heroic and fast-thinking photojournalist who owns RMG News pulled him to safety, reports CBS Los Angeles.

It was around 3:30 a.m. Sunday when CHP responded to a report of a traffic collision on the northbound 110 near Gage.

A dark-colored SUV was reported stalled on the northbound side in the number one lane. The vehicles lights failed and was “blacked out” and not visible to other motorists. Two more motorists make glancing blows on the the SUV, but a third vehicle slams into it causing a fireball.

“He didn’t have a chance. It’s one of the most dangerous things that can happen to you, is get stalled on the freeway at night,” says Raishbrook.

When he saw the car burst into flames and the driver unlikely to get out, Raishbrook says he took action.

“That’s when I switched over from cameraman mode to rescuer,” he says.

He makes a living catching dramatic scenes just like the one he happened upon.

“The crash I got on tape was very dramatic but at that point in my mind, my mind switched to – I go to go help,” he says.

Raishbrook ditched the camera and he ran to the SUV — he knew he was running out of time.

“He probably had about 10 seconds at that point before he would have died of smoke inhalation or burns,” Raishbrook says.

The videographer says he smashed a window and powered through the thick smoke to do what he had to.

“Managed to wrench his seatbelt off his shoulder and grab his waist and just wrench him out,” he says, matter-of-fact.

Another videographer captured the unconscious driver being pulled to safety, away from the burning car.

“I’ve probably watched [the video] about 30 times,” says Raishbrook, “Just reliving that moment. It still feels surreal to me. That two minute experience for me is going to last the rest of my life.”

The driver was transported in critical condition to a local hospital by LAFD. He is talking and he is expected to released from the hospital in a couple of days.

It is unknown if alcohol was a factor in the crash.