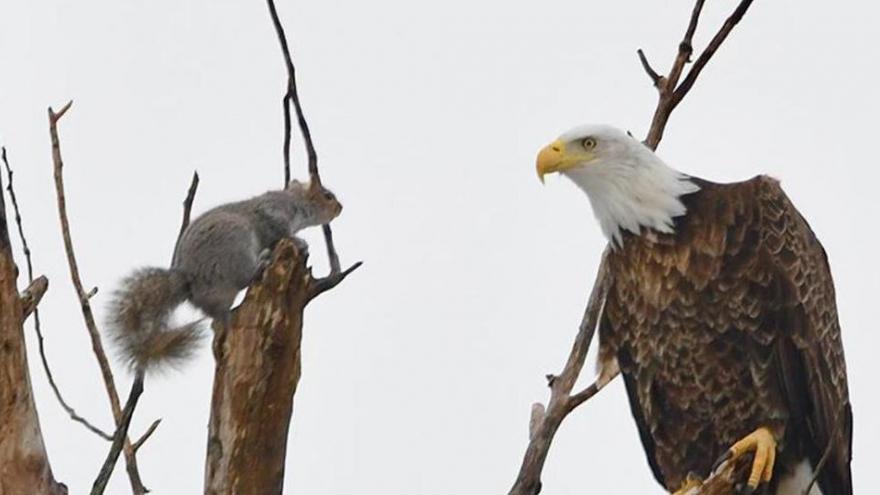 (CBS News) -- A wildlife photographer from Lincoln, Maine, who spends his life surrounded by animals was awestruck by two creatures doing something he had never seen before. It was a bald eagle perched on a tree having a stare-off with a squirrel.

Roger Stevens Jr. told CBS News he's been a professional photographer for 21 years and always packs his camera with him. On the morning of March 11, he was extra grateful to have that camera. On top of a tree, he saw a squirrel defending its babies against an eagle. Squirrels in the area usually give birth around this time each year, Stevens said. He's seen many squirrels and many eagles before, but never interacting like this.

Stevens is currently writing a book on eagles, so he felt lucky to have spotted one. He started snapping away at the animals' standoff on top of the tree. The squirrel kept darting into hollow openings in the tree, almost taunting the eagle. "They went out for about 10 minutes and eventually the eagle got tired of that game and flew away," Stevens said. "So the squirrel's perseverance paid off."

He didn't know how well the photos came out until he went home. "I put them on the computer and I was like, 'Oh my God, this is incredible!' But I never thought they'd get the attention they've been getting," Stevens said.

The photographer posted several photos of the standoff on Facebook. "I couldn't have made this up!! Gray Squirrel and Bald Eagle in staring match," he wrote in one caption. Little did he know, his two subjects would gain widespread internet fame. One photo of the squirrel and bald eagle standoff was shared over 11,000 times.

The astonishing photos were picked up by many media outlets across the country.

"Whether you're an artist or whatever, one picture could kind of define who you are," the photographer said of his new-found viral fame. He thinks the photos would've gone even more viral if he explained the whole story on Facebook. "That's behavior that you just don't see," he said. "It's kind of a David and Goliath."

"It's like the little guy gets the big guy," he said, "If they knew the whole story, which is that the squirrel was defending its den, it would've been even more awe-inspiring."

Stevens not only photographs wildlife, he often visits local schools to teach kids about his findings. "They always ask what the most dangerous animal is," he said. "I always say, 'Well, it's a mama with its baby.'"