People not happy with large mound of dirt in West Allis 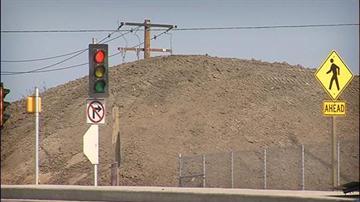 WEST ALLIS, WI - A mound of dirt began appearing along I-894 and the Greenfield Avenue exit not long ago. It kept growing larger and larger. It doesn't have an official name yet, but some are calling it \"Mount Stallis.\" Others like Alderman Michael May call it Conrad Hill because it sits near the Conrad Gardens Neighborhood of West Allis. No matter what it's called not many people like it. Nearby businesses say the large mound of dirt blocks people from seeing their establishments from the freeway. Some people in the neighborhood say it's simply a dusty mess. The Wisconsin Department of Transportation has placed excess dirt there from the Zoo Interchange reconstruction project. Officials say the mound will stay there and likely will be covered with grass and some trees. Even still, many wish that plot of land would have been used for commercial development.