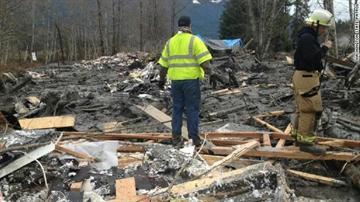 (CNN) -- At least 10 people are unaccounted for after a landslide north of Seattle that's already blamed for three deaths, a spokesman for Washington's governor said Sunday.

Rescuers dug desperately through the rubble left behind by Saturday's landslide in the town of Oso, hoping to find survivors who were crying for help underneath the debris. The landslide cut off another town and prompted an evacuation notice for fear of a potentially \"catastrophic flood event,\" authorities said.

At least six houses were destroyed in the landslide and possibly 16 were damaged, the Snohomish County Sheriff's Office reported. Seven adults and a 6-month-old boy were rescued and sent to local hospitals, deputies said. But David Postman, a spokesman for Gov. Jay Inslee, said the whereabouts of at least 10 people were unknown Sunday morning.

People were crying out for help from underneath debris early Sunday, said Capt. Brandon Asher of the City of Arlington fire department. Rescuers are trying to get through the wreckage to reach them, he said.

Oso is a remote community of about 180. Groundwater saturation tied to heavy rainfall in the area over the past month was blamed for the landslide, which authorities say measured at least 45 yards wide.

Harborview Medical Center in Seattle reported that five patients had been airlifted there and were in its care. Three of those -- including the baby, a 58-year-old man and an 81-year-old man -- were in critical condition Saturday night, according to spokeswoman Susan Gregg.

The landslide cut off the road to Darrington, a town of about 1,350 people, 15 miles to the east. Part of the Stillaguamish River also was blocked, and residents were warned of possible flooding both upstream and downstream of the collapse.

The county later said \"we strongly recommend\" that those living in the north fork of the Stillaguamish River flood plain, from Oso to Stanwood, \"evacuate your home immediately.\"

\"We are working on establishing shelters for those who have nowhere to go,\" county spokeswoman Rebecca Hover said in a statement. \"Until then, people should get to higher ground as soon as possible.\"

\"The situation along the Stillaguamish River is extremely dangerous,\" Inslee said in a statement Saturday. \"Anyone along the flood plain of the Stillaguamish between Oso and Stanwood should leave the area before dark due to risk of catastrophic flooding.\"

A number of agencies have responded, including the state transportation and emergency management departments, the U.S. Navy and fire departments across Snohomish County.

The Snohomish sheriff warned people to stay clear of trestles or bridges or anywhere near the Stillaguamish River downstream of the slide.

\"Water could break through at any moment,\" the sheriff's office tweeted.