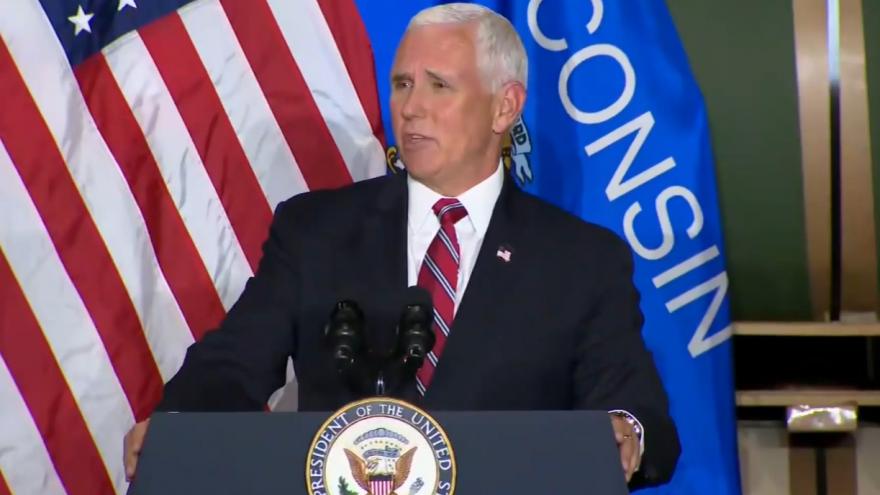 DARIEN, Wis. (CBS 58) — The Trump campaign continued to try to steal some spotlight from the DNC anchored in Milwaukee with a visit from Vice President Mike Pence Wednesday.

Republicans at the event wasted no time in highlighting the contrast between the GOP’s physical presence in Wisconsin with the absence of national Democrats.

“If I had any guess – they’re going to end their convention in a basement on the east coast,” Rep. Bryan Steil said during remarks to introduce the vice president.

The event at Tankcraft Corporation is part of a week-long strategy of counterprogramming from the Trump campaign. On Monday, President Trump visited Oshkosh while his son, Eric Trump, held an event in Milwaukee on Tuesday. Pence promised the campaign would continue to place a heavy emphasis on Wisconsin, which is crucial to deciding the election.

“In fact, the last time you saw a democrat nominee for president in the Badger State was back in 2012,” Pence told the audience. “Well I’m here to tell you – get used to seeing us because President Donald Trump and I are going to be back in Wisconsin again and again to earn four more years in the White House.”

The vice president placed an emphasis on economic policy and tried convincing voters the Trump administration is best equipped to lead the country out of the pandemic, including mentioning an accelerated timeline on a vaccine.

“We are well on our way to having the first coronavirus vaccine before the end of this year,” Pence said about a report he received from the Coronavirus Task Force this week.

The event had around 200 people in attendance with little to no social distancing and some choosing to wear masks and others not.

Supporters said they do not place blame on President Trump for the country’s response to the pandemic and credit him with what’s been done so far.

“I think [President Trump has] done a great job – I think the governors have screwed up a lot,” Joseph Falcone, a supporter from Walworth, told CBS 58. “But I think from a federal government standpoint he’s done a wonderful job.”

The president continues his counterprogramming in battleground Midwest states on Thursday when he is scheduled to hold an event in Pennsylvania. It is also the same day as when Joe Biden is set to formally accept the Democratic Party’s nomination for President of the United States.

The Democratic Party of Wisconsin held a virtual event in response to Pence’s visit. State Senate Minority Leader Janet Bewely said during the event, “[President Trump’s] policies have hurt everyone -- Democrats and Republicans alike, and his response to COVID-19 has been even more harmful than his trade policies for this country and specifically Wisconsinites. COVID-19 and this President’s failed response are not just hurting pocketbooks and wallets, they are weakening rural communities. He has clearly stopped trying to solve this crisis and has left us to fend for ourselves -- we deserve better.”