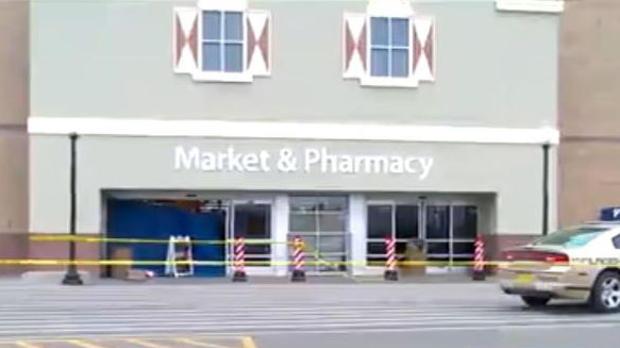 (CBSNews) PELLA, Iowa -- A pickup truck smashed through the front doors of an Iowa Walmart store on Thursday, killing three people and scattering merchandise on the floor before it came to a stop at the fresh produce section in what authorities believe was a tragic accident.

Witnesses told CBS Des Moines affiliate KCCI-TV the pickup was going fast when it rammed through the doors.

“It was like a train came through,” Jim Frank told the station.

A photograph posted by the Des Moines Register showed the pickup resting near a sign that said “Fresh Produce,” with boxes and other debris behind it. Witnesses said the truck entered through the front doors in the grocery portion of the store and came to a rest after hitting a refrigerated produce display.

“At this time, we don’t have any reason to believe it was intentional,” said Patrol Sgt. Nathan Ludwig, who was at the scene of the crash. Ludwig said officials are investigating all possible scenarios.

The crash in Pella, Iowa, just before 10 a.m. killed three people - all outside the vehicle - and injured the driver and another person, Ludwig said. None of those killed or injured were children.

Authorities had not released the identities of those involved by late Thursday afternoon as officials worked to inform family members of the casualties. Ludwig said he did not have the medical conditions of those hurt.

Don French, a Walmart employee who was off duty and shopping in the store Thursday morning, told the Des Moines Register that the truck had been traveling fast enough to smash through the concrete barriers intended to protect the entrance from such crashes.

French said he heard the crash, rushed to see what had happened and found a horrific scene with the pickup truck inside the store and severely injured people.

“I understand that two of the victims were co-workers and friends of mine,” he said before pausing and breaking into tears. “We’re a small town. We’re a community. We’re family here.”

Witnesses also told Knoxville, Iowa, radio station KNIA/KRLS that the truck was traveling at a high rate of speed at the time of the crash.

The store was evacuated and closed Thursday as law enforcement investigated.

Walmart management said in a statement: “We’re heartbroken by what appears to be a tragic accident.”

Pella - a city of 10,000 known for its Dutch roots and fully functional 1850s-style windmill - is 38 miles southeast of Des Moines.