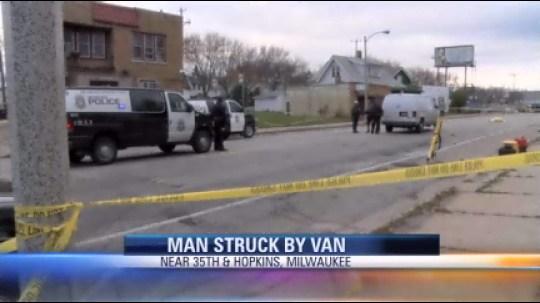 Milwaukee Police are investigating a pedestrian accident on the north side that left a man dead.

The Milwaukee Fire Department rushed to the 4600 block of North Hopkins just before 7 a.m. Wednesday. Minutes after they arrived, the man was pronounced dead.

Officers with the Milwaukee Police Department blocked off the area for about three hours as they worked the scene.

Investigators took pictures of the van involved as other officers worked to re-construct what happened. The driver of the van stayed on the scene and was interviewed by detectives as a part of the ongoing investigation.

A large crowd of neighbors watched the situation unfold, calling it tragic.

Many of them walk to the corner store across the street and said it can be dangerous trying to cross Hopkins safely.

\"It's really just a straight shot. A lot of people are gunning it through here,\" said Justin Yops, who lives nearby. \"So for someone to be walking across the street and get hit, it's not like it wasn't going to happen. They really need a stop sign or flashing lights through here.\"

Police have not released the victim's identity, only saying that it is a man.

Stay with CBS 58 throughout the day for updates on this story.