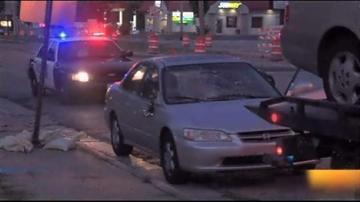 MILWAUKEE -- Milwaukee police are investigating a fatal hit and run crash on the city's northwest side. Investigators say a man was run over near Lovers Lane Road and Silver Spring Drive just after midnight.

According to police, a 35-year-old man was hit by a maroon or burgundy sedan as he was crossing the street. The victim was also hit by a 1999 Honda Accord. The driver of the Honda stayed on scene and is cooperating with police in their investigation.

Police are still looking for the driver of the maroon vehicle that initially struck the 35-year-old victim. Police are using business surveillance cameras to gather information.

The victim's identity has not been released.