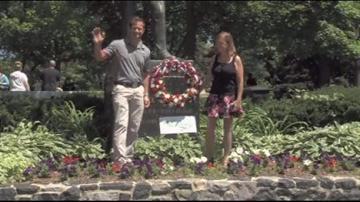 CUDAHY-The statue of city founder Patrick Cudahy was rededicated July 4th, 65 years after it went up at the entrance of Sheridan Park.

Cudahy was born on St Patrick's Day in Kilkenny Ireland and months later his family emigrated to Wisconsin where the brothers built a meat packing empire.

Descendants of Patrick Cudahy were on hand for a special ceremony, including grandson, Milwaukee Philanthropist Michael Cudahy.

\"He was the entrepreneur of entrepreneurs,\" Michael Cudahy told CBS 58 News. \"Going to work at age 11 and rising up to building up a huge company and a huge city.\"

There are also plans to restore older trails in Sheridan Park which is celebrating its centennial.