Patients give horror stories as cancer doctor gets 45 years 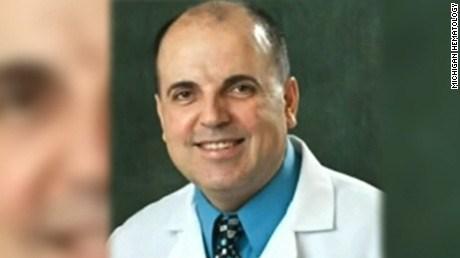 (CNN) A Detroit-area doctor who authorities say gave cancer treatment drugs to patients who did not need them -- including some who didn't actually have cancer -- was sentenced Friday to 45 years in prison.

Dr. Farid Fata, 50, pleaded guilty in September to giving cancer treatments to misdiagnosed patients, telling some they had a terminal blood cancer called multiple myeloma. He pleaded guilty to 13 counts of Medicare fraud, one count of conspiracy to pay or receive kickbacks and two counts of money laundering.

Federal prosecutors called him the \"most egregious fraudster in the history of this country.\" To Fata, they said, \"patients were not people. They were profit centers.\"

The hematologist-oncologist gave an emotional apology in court, saying he was \"ashamed\" of his actions.

But to the dozens of Fata's victims who filed into U.S. District Court for the Eastern District of Michigan throughout the week to watch his sentencing, his apology doesn't matter. Many will live with the effects of his, at times, unnecessary treatments, for the rest of their lives.

As Geraldine Parkin, the wife of one former patient said in court, many were \"tortured until their last breaths.\"

Treated, but not sick

Robert Sobieray went to Fata and was given chemotherapy treatments for two and a half years. But he never had cancer.

The chemotherapy treatments were painful, and made him physically sick. They were so strong that his teeth fell out and his jaw started to change shape. Years after finding out he didn't have cancer, he has lost all but one of his teeth.

\"With all the bills piling up, I can't afford to get new teeth,\" Sobieray said. \"(I) would like to eat a good meal again someday. Like salad, used to love eating salad. I can't eat that anymore. A lot of things I love I can't eat anymore.\"

Patty Hester went to Fata in 2010 after being recommended by another doctor. Her white blood cell counts were low, and Fata was a renowned hematologist and oncologist.

Hester, who worked in an emergency room at the time, was devastated when Fata told her she had myelodysplastic syndrome (MDS).

\"He said, 'You need to start on chemo, like, immediately,'\" Hester recalled.

She was in disbelief. And after debating with Fata, he instead put her on iron treatments and, eventually, blood plasma treatments. She was still taking those pricey plasma treatments the day co-workers made her come to the TV and see the news: her doctor had been arrested.

Hester did not have cancer.

'Took full advantage of my trust '

Some of Fata's patients did have various forms of cancer.

Chris Sneary faced Fata for the first time since his former doctor's arrest on Tuesday as he read his victim impact statement in court. He turned to glance at Fata, took a deep breath and read his story.

Sneary came to Fata to be treated for testicular cancer from 2010 to 2013. He had 40 days of chemotherapy, 14 days of hydration therapy and dozens of other treatments and procedures.

\"I gave full and total trust to this man to get me and my family through this journey I was about to begin,\" Sneary said.

Sneary discovered after Fata's arrest that he'd been given \"gross overtreatment\" -- more expensive and harsh chemotherapy than was necessary and, worse, he had a testicle removed that was medically unnecessary.

\"Dr. Fata took full advantage of my trust in him, my fear of dying and, most of all, my top of the line health insurance,\" Sneary said, at times fighting back tears in court.

And one patient who did have cancer spoke out in court posthumously. Donald Crabtree's wife, Marietta, read a statement he wrote back in December last year, before he passed away.

Crabtree said it was his dying wish for Fata to spend the rest of his life in prison.

Before being sentenced, Fata turned to face those who were at his sentencing and apologized.

\"The quest for power is self-destructive,\" he said, according to WDIV. \"They came to me seeking compassion and care. I failed. Yes, I failed.\"

Now some of his former patients have a chance to file claims and possibly be awarded some of the funds that he collected from Medicare and insurance companies.

Fata is expected to serve at least 34 years of his sentence, possibly at a low-security prison in Michigan.