Passengers who landed at O'Hare from Liberia being monitored for Ebola 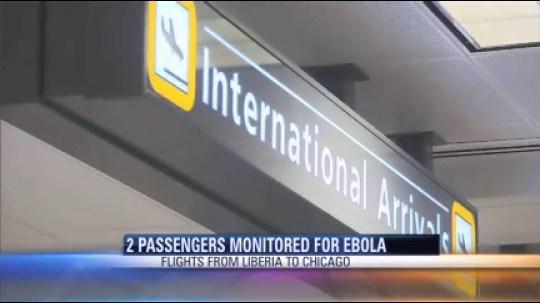 Two passengers who became ill on flights arriving at O'Hare from Liberia are being monitored for Ebola.

Officials say there's no direct evidence that either passenger has the deadly virus, but authorities say they are taking precautions.

One of the passengers, a child, reportedly vomited during the flight and is now being quarantined at University of Chicago Medical Center. The child was screened by federal authorities and found to have no fever and no other Ebola symptoms other than vomiting.

Separately, an adult also traveling from Liberia reported nausea and diarrhea. That passenger was taken to Rush University Medical Center for evaluation. That person is being monitored, but has not been tested for Ebola.

The two passengers are not related and were not traveling together, says CBS Chicago.

An airline passenger was being evaluated at a hospital in Newark, New Jersey Tuesday due to Ebola concerns, CBS New York reported.

Centers for Disease Control and Prevention spokesperson Carol Crawford said the Newark passenger was \"identified as reporting symptoms or having a potential exposure to Ebola\" during the enhanced screening process for those arriving in the U.S. from the West African nations of Liberia, Sierra Leone and Guinea, according to CBS New York.