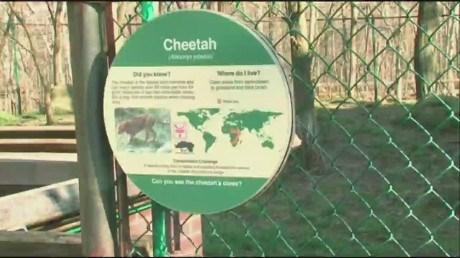 (CNN) Zoo officials in Cleveland are considering pushing for child endangerment charges against the parents of a 2-year-old boy who fell into a cheetah exhibit.

\"Unfortunately, we have a number of eyewitness accounts that point to the strong likelihood that the child was dangled over the rail,\" Dr. Christopher Kuhar, executive director of the zoo, told CNN affiliate WEWS.

Kuhar says the child's parents quickly went into the exhibit after the fall happened and that the cheetahs made no attempt to interact with the child or his parents.

The Cleveland Fire Department said that the mother was holding two children when the 2-year-old fell inside but that the boy was already out of the pit when fire crews arrived.

Cleveland Metroparks -- which manages the city's parks, golf courses and zoo -- has reportedly served a summons and plans to push for child endangerment charges against the parents.

The child and his parents have not been identified. The boy was transported to a local hospital for observation and is said to be in stable condition.

The zoo's cheetahs are in an outdoor exhibit attached to the primate, cat and aquatics building. The zoo's website says they are fed a canine diet along with weekly bones and horse meat, chicken and rabbit.

Cheetahs are considered to be the world's fastest land animal and are recognizable by the round black dots on their fur. Unlike other cats, the cheetahs claws are always out and do not fully retract.