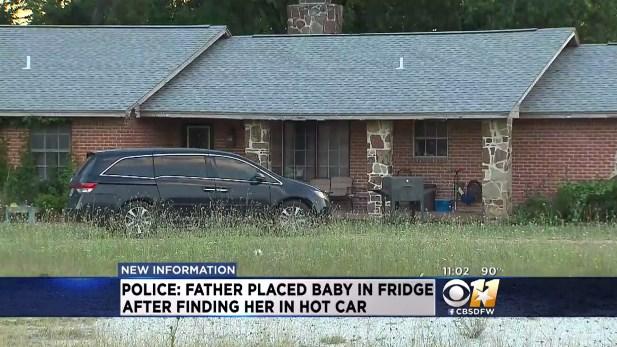 MCKINNEY (CBSDFW.COM) – A North Texas father and former teacher in the Celina Independent School District is free on bond. Michael Shannon Thedford was arrested after his 6-month-old daughter died after being left in a hot car Tuesday.

Thedford posted $20,000 bond late Tuesday night. He has been charged with manslaughter.

Thedford told investigators he dropped off his three and 5-year-old children at a daycare center, while his wife was at work. He said he went home and went to sleep, forgetting his 6-month-old daughter was still strapped in car seat inside the minivan.

Thedford said when he went outside and found the baby not moving, he immediately took her indoors and put her in the refrigerator, with the door open. He then called his wife and 911, and attempted CPR.

When paramedics got to the home outside Melissa, deputies say the child was still unresponsive. Temperatures were in the mid 90’s by afternoon.

From across the street, a neighbor watched in horror as the adults discovered the child. Fabiola Contreras said Thedford and the child’s mother were in tears and that the events are just hard to believe. “Forgetting a child? His child? It’s hard to believe, because how can you forget a child in your own car? It’s your child.”

Investigators are expected to spend today following up on what happened leading up to the baby being left in the car. Before being taken to jail yesterday, neighbors say investigators appeared to make Thedford reenact what happened with a doll.

Assistant Celina ISD Superintendent Bill Hemby confirmed to CBS 11 News that Thedford was a teacher employed with the district for the 2015-2016 school year — teaching physics and chemistry. Hemby said Thedford resigned in February on good terms, saying that he had plans to start teaching college classes. Hemby also called Thedford “very conscientious” and a “hands on father.”

Officials with KidsAndCars.org say with the death yesterday, 16 children in the United States have died this year due to heat stroke in a vehicle. Compared to last year, when seven children died, that’s an increase of more than 230-percent.

Texas is number one in the nation for overall hot car child deaths, with at least 106 children ranks having died from child vehicular heat stroke from 1991 to 2015.

Thedford’s daughter is the third Texas child to die in a hot car this year. A seven-month-old Lufkin baby died in March and a three-year-old Houston boy died last week.