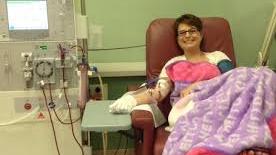 MILWAUKEE--Tammy Brumm woke up three and a half years ago and both her kidney's had suddenly stopped working. But things would get much worse, before they finally got better last month.

Her husband Robert thought he would easily donate one of his and save his wife's life. But the news wasn't good. Despite Tammy's approval for a transplant, he wasn't a match, and neither was anyone close to the family.

So, after years of dialysis, chemotherapy, and weeks of emergency room hospital stays due to other medical issues that arose from the kidney problems, Robert  and Tammy started a Facebook page to help pay the medical bills which had started to pile up. Meantime, the Brumm's became aware of the \"Paired Organ Exchange Program, also known as the Kidney Swap.

The program allowed Robert to donate his kidney to a complete stranger in another part of the country. That allowed Tammy to receive a kidney that matched her. That network of people needing and donating kidney's, would essentially form a chain of folks around the country swapping organs.

The program is relatively new, going back about 5 years. And Aurora St. Luke's Medical Center in Milwaukee performed the surgery for Tammy and Robert.

Dr. Ajay Sahajpal, the surgeon who performed the procedure on the couple says that despite the estimated 500 organ transplants that he's performed over the years, this one stands out because of the logistics involved. Adding that what started as a swap between 8 patients, became a swap between 12 patients exchanging organs, and that once the procedure is planned, very little will stop it due to the numerous back-up plans put in place to avoid last minute issues.

Meantime, Tammy lives with 3 kidney's, two which don't work, while Robert lives with one less. Dr. Sahajpal, a board certified transplant surgeon, specializing in liver, kidney and pancreas transplants says the pair will live perfectly healthy lives with proper care.

The Brumms say their family which includes two boys, now in their late and mid teens, is closer and happier than ever. Adding that this entire nightmare has brought them closer together, and incredibly, say that they can't imagine having not gone through the experience.