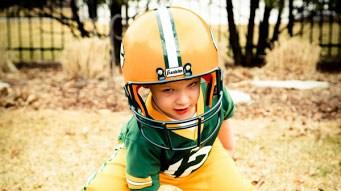 The Green Bay Packers offered fans a chance to have their photo printed on the tickets in the \"Packers Ticket Takeover Contest.\"

There were more than 9,200 entries and 24,500 votes on packerseverywhere.com.

“One of the reasons I believe he enjoys watching the Packers so much is because it is how he continues to hold a strong connection to his ‘Dada,' who passed away in November of 2013,” Fischer said. “When Declan sees himself dressed up as a Packers player on 80,000 tickets, it will give him a chance to be closer to his father and truly make his dreams come true.”

She will receive two tickets to the game and hotel accommodations.

This will be the first Packers game Declan attends.