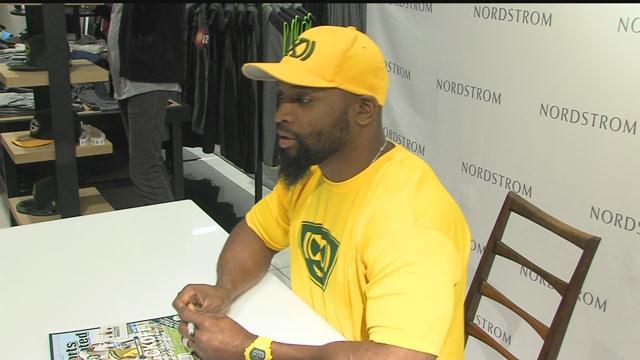 Inside Mayfair Mall's newest store Thursday night, a party, complete with food, drinks and a celebrity.

Joshua Wojak came early with his dad Robert to be first in line.

After a simple greeting, Green Bay's all-time leading rusher autographed Wojak's Sports Illustrated cover and posed for a picture. It was a casual interaction with one of the super stars on Wojak's favorite team.

The team's history was proudly on display at Nordstrom's to commemorate past Super Bowls, leading up the Golden 50.

Former running back Ahman Green helped celebrate the NFL's launch of a new clothing line, "On the Fifty," to get fans ready.

"I'm very excited," said Green. "It's Milwaukee. It's the Packer fan base that gets a little crazy in the stands."

Some the memorabilia on hand included a ticket to Super Bowl II, showing a cost of $12. Getting a seat in Levi's Stadium in Santa Clara, California in 2016 will run in the thousands.

Green Bay fan Mia Smith would love to go but, "I need my husband to buy some tickets," she said.

But will the Packers even be there?

After losing two games in a row, fans aren't sure. However, they do know, the team has a lot to work on.

Green said his former team still has a chance to make the big game, but fixing mistakes starts with breaking down film.

He predicts a win on Sunday against the Detroit Lions. In the meantime, he offers a five-letter word of advice.

"I won't say it like my old teammate said but I'm going to say chill," said Green. "Just chill."

Milwaukee is the NFL's third stop to launch its "On the Fifty" game day wear, after visits in Denver and Pittsburgh. The last one will be in New England.

Remember, CBS 58 is your home for Super Bowl 50 on Sunday, February 7th.