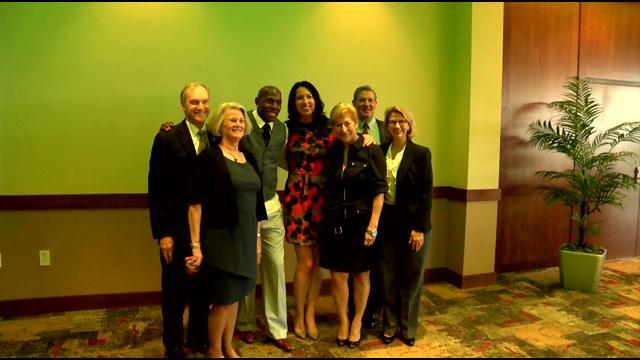 He's the Packers All-Time leading receiver with a mega watt smile, but Donald Driver was deadly serious in Mequon Thursday and talking about tackling domestic violence.

He was a guest host for the 35th anniversary celebration of Advocates of Ozaukee, an outreach program that helps victims of domestic abuse and sexual assault.

Driver posed for pictures and spent time with as many ticket holders as possible. He also auctioned off a dance to raise even more money for this worthy cause.

\"So tonight let's change someone's life,\" Driver told the crowd. \"Let's make this opportunity work. Can we do that?\"

The audience responded with a loud yes and there rose to their feet and applauded.

Advocates of Ozaukee operates a shelter that can house more than a dozen people seeking help from an abusive situation.

Their stated mission is \"To support and empower those who have experienced domestic or sexual violence by providing safety, advocacy, education and resources; to educate and work with and within the community to promote respect, dignity and appropriate behavior; to transform our community so that domestic and sexual violence no longer exists.\"