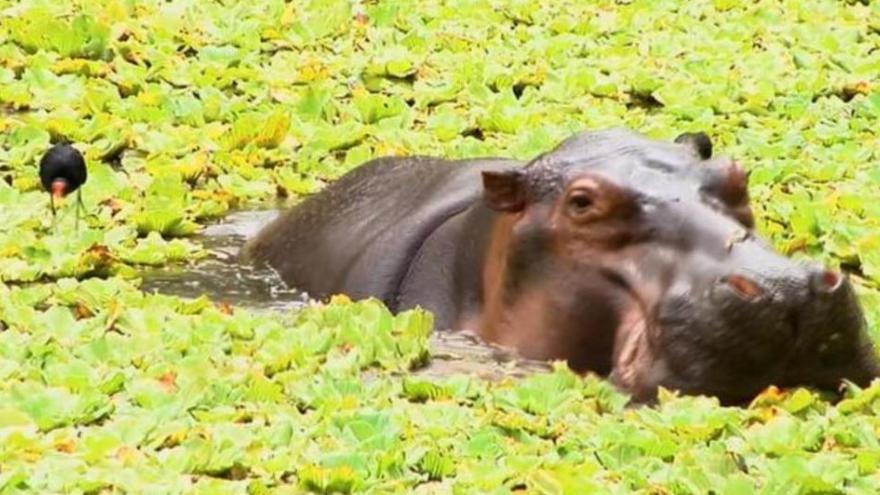 (CBS News) -- Fishing villages, small boats and children at play dot the landscape along the shallow waterways of Colombia's Magdalena River. But an invasive species left behind by one of the country's most infamous figures is threatening the ecosystem and, possibly, a way of life.

That species? Hippos. The giants, native only to Africa, are now running wild in Colombia, reports CBS News' Manuel Bojorquez.

The story of Colombia's hippos starts in Villa Napoles, the former estate of Pablo Escobar, who in his heyday had four hippos smuggled there for his private zoo.

Escobar's ranch housed hundreds of exotic animals including rhinos, elephants and giraffes. By the 1980s, his cocaine empire made him the wealthiest and most feared drug lord in the world. For Colombia, it was a reign of terror. He's said to be responsible for some 7,000 deaths.

Around the time Escobar met his death in the early 90s, the government relocated most of the animals but not the hippos who were basically allowed to roam free.

"People forgot the hippos," said biologist David Echeverri, who works with CORNARE, the environmental agency in charge of tracking and managing the hippos in the region. He estimates there are about 50 or more of them now.

The area where they roam is a paradise for the animals who have no predators and ample food and water. But they're getting too close to people. It's not uncommon to spot a three-ton hippo walking around town. Locals call them the "village pets," but Echeverri said the "dangerous" and "territorial" species is anything but.

In Africa, hippos cause more human deaths than any other large animal. So far, there are no known attacks in Colombia.

The majority of the hippos still live inside Escobar's former estate, which was turned into a theme park in 2007, but the issue is that they can't keep them contained. Some have been able to get out which is how they are turning up in other areas.

Oberdan Martinez runs a theme park there, where the hippos are a main attraction. According to Martinez, Colombia's the only place you'll see a pack of hippos in the wild outside of Africa. He also said it's more common to see a hippo in that area than a pig.

There's concern the hippos have already started to displace native wildlife, like the manatee, and keep getting too close for comfort.

In the past year, fisherman Pablo Jose Mejia has come across five hippos that ventured outside of the theme park. But he said they're like dogs – if you know how to deal with them, you'll be fine.

But Echeverri fears, with an ever-growing hippo population, it's only a matter of time until someone gets hurt and killing the animals has proven highly unpopular.

"We can't just kill the hippos and the other solution is relocating hippos, sterilizing hippos," Echeverri said, although he acknowledged that would be an expensive and dangerous process.

With limited funds, it's a solution unlikely to stem the tide on a legacy that just keeps resurfacing.