Over 50,000 guns guns turned over in Australia after crackdown on illegal weapons 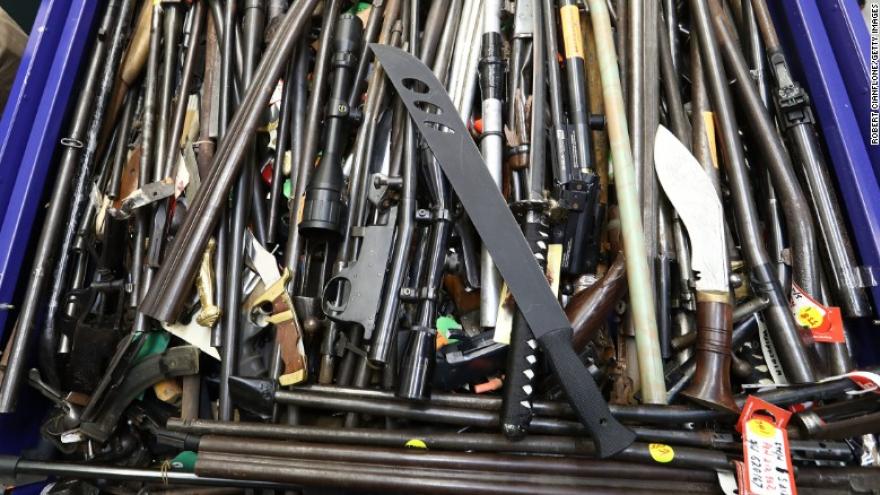 AUSTRALIA (CNN) -- At least 50,000 guns were turned in across Australia over the past three months as part of a nationwide crackdown on illegal firearms which began in July.

Throughout the three month period, anyone who owned an illegal firearm could turn it in to police without a penalty, after the Australian government announced a national firearms amnesty.

"This is an overwhelming response and represents a significant reduction in the number of unregistered firearms in the Australian community," Prime Minister Malcolm Turnbull said in a statement.

According to Turnbull's office, the surrendered guns ranged from pre-1900 firearms all the way up to semi-automatic weapons and a rocket launcher.

"We've seen the shocking tragedy in Las Vegas ... We have strict gun control laws, but we don't take anything for granted. We here not complacent about it," Turnbull told reporters on Friday.

Australian authorities estimated before the amnesty there were around 260,000 illegal firearms on the streets and in homes. All the collected guns will be destroyed, Turnbull said.

Announcing the amnesty in July, Justice Minister Michael Keenan said illegal guns had been used in a deadly shootout in Melbourne early this year, as well as the siege of a Sydney cafe in 2014.

"If there are members of the public who still have firearms that they're concerned about, I would strongly encourage them to make contact with their local police across different jurisdictions," AFP Commissioner Andrew Colvin told reporters Friday.

"There are continuing amnesties, so if you have a firearm that you're concerned about, the fact that this amnesty has ended is not an excuse not to come forward to police and declare that firearm."

Turnbull said the last national gun amnesty was held in 1996 as part of a huge crackdown on firearms following a mass shooting which killed 35 people in Port Arthur, Tasmania.

Strict background and identification checks were also introduced to keep guns out of the wrong hands. Gun deaths have declined since the reforms were put in place.