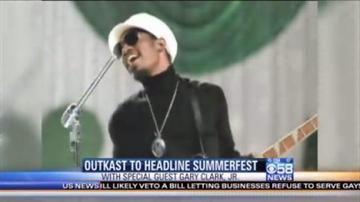 MILWAUKEE -- Summerfest announced the eighth headliner for this year's festival--and it's sure to be \"So Fresh, So Clean\".

Outkast recently announced its reunion to celebrate its 20th anniversary as a group, and the hip-hop duo will bring that tour to the Marcus Amphitheater on June 29.

Tickets go on sale through March 3 at noon and include admission to Summerfest.

Fans can find tickets at the Summerfest Box Office or through Ticketmaster.