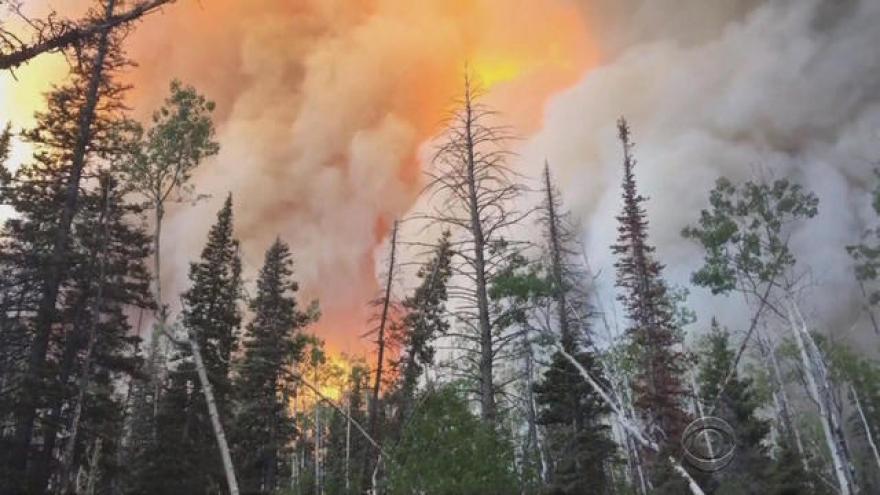 (CNN)Sizzling heat is exacerbating the fire risks out West, where weary crews have been battling blazes in Utah, Nevada, Oregon and California.

About 16 million people remained affected by heat warnings and advisories in Southern California, southern Nevada and parts of Arizona.

In the big metro areas of Phoenix and Las Vegas, temperatures are expected to be above 110 degrees. That would be 10 days in a row for such temperatures in Las Vegas.

Relief could be coming, however.

"Cooler weather is expected to push into the Southwest over the next few days," Hennen said.

Fifteen hundred people have been evacuated from areas of concern, according to Joseph Doherty, a spokesperson for the Utah Division of Emergency Management.

The Utah Division of Forestry, Fire and State Lands said that 1,427 personnel were fighting the massive Brian Head Fire that started June 17.

The fire has burned 46,000 acres and is 10% contained, with the agency estimating it will take until July 15 to get it fully under control.
While firefighters made good progress over the weekend, Monday saw winds of 30 mph, which increased fire activity, according to Utah Fire. Officials had been worried that the winds would push the fire to the northwest. As a precaution, the region to the northwest of the fire, a remote area called Upper Bear Valley, has been evacuated, she said.

"Horse Valley will be an area of concern (Monday), but crews have begun to prepare for this using dozers and retardant dropped from air tankers to establish indirect firelines," Brian Head town said on its Facebook page.

At least 13 homes and eight outbuildings have been destroyed in the ski town, which sits near the Dixie National Forest in the southern part of the state.

The Frye Fire in southern Arizona covered more than 37,000 acres as of Sunday, with 39% of the perimeter contained, the forest service at Coronado National Forest said.

More than 900 personnel are battling the fire, which started June 7. The Frye Fire is about 70 miles northeast of Tucson, the second-largest city in Arizona.

Gov. Doug Ducey declared a state of emergency Friday in Arizona to authorize the use of $200,000 of emergency funds to counter increased wildfire activity.

Since April, the state has experienced more than a dozen large wildfires "aided by high temperatures, winds, and available fuels," his office said in a statement.

"We thank the many brave men and women who have stepped up and responded to wildfires around Arizona," Ducey said. "I'm issuing today's declaration to make sure they have every resource needed to do their jobs and protect our communities."
The area near the fire is expecting temperatures in the triple digits through next Friday, with no sign of rain.

A fire sparked by a traffic collision in California's Placerita Canyon is the latest blaze to hit the West amid a deadly heatwave.

The Los Angeles County Sheriff's Department said the collision Sunday caused a tree to catch on fire, beginning a blaze that spread toward the Disney Ranch area.

By Monday evening, the fire held at 760 acres, with 75% containment, according to the Los Angeles County Fire Department.
Evacuation orders that had been issued earlier Sunday were lifted later in the evening.

The US Forest Service has reported that at least 13 large wildfires are burning across the western United States with more reported smaller ones across the region. Two of the largest are in southern Arizona and Utah.

Wildfires already have caused far more destruction than usual in the first half of 2017, meteorologist Haley Brink of the CNN Weather Center said. Almost 1 million more acres had burned by Thursday, compared with the 10-year average through June 22.

There are also smaller blazes in other states.

In New Mexico, the Corral Fire reached about 17,000 acres and is burning with low to moderate intensity, according to New Mexico Fire Information.

Meanwhile, in central Oregon, the Rhoades Canyon Fire grew to 15,000 acres but was 100% contained Sunday.

In California, the Manzanita Fire reached 1,200 acres and was 0% contained Monday night according to the Riverside County Sheriff's Department. The fire started after a single vehicle collision. Over 300 firefighters will continue to fight the fire into Tuesday. The fire shut down Highway 79 in both directions between Beaumont and San Jacinto because it was burning on both sides of the road. Voluntary evacuations are in place in the area.

The heat in the West and Southwest is blamed for the deaths of two people in California, and it could have been a factor in the deaths of two hikers whose bodies were found in New Mexico's Carlsbad Caverns National Park.