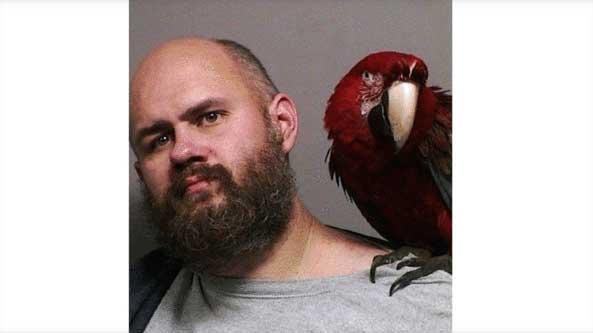 WASHINGTON CO., Ore. (CBS NEWS)– An Oregon man got to bring his bird with him for a mugshot when his court appearance ran long thanks to an understanding sheriff’s office.

CBS affiliate KOIN reports that Craig Buckner, 38, brought his macaw, named “Bird,” to court Monday and put the animal in a nearby tree to wait for him.

But things took longer than expected and Buckner reportedly became concerned for the well-being of his 4-year-old feathered friend.

Deputies said “Bird” was very well-trained and wouldn’t leave the tree for anyone other than his owner. Buckner was escorted out of the courthouse to retrieve “Bird” from the tree and brought him inside to the booking area where he was cared for.

A friend eventually came to pick up “Bird” while Buckner finished his court appearance. According to the Washington County Sheriff’s Office Buckner was in court because of a failure to appear on previous theft and drug charges.

“Our sheriff’s office has very strong core values of doing the right thing,” Deputy Shoana McKelvey, who cared for “Bird”, said in a press release. “Mr. Buckner was already in a stressful position and did not need the additional stress and worry of his loved pet, Bird!”

McKelvey said bringing “Bird” and his owner together brought her joy.