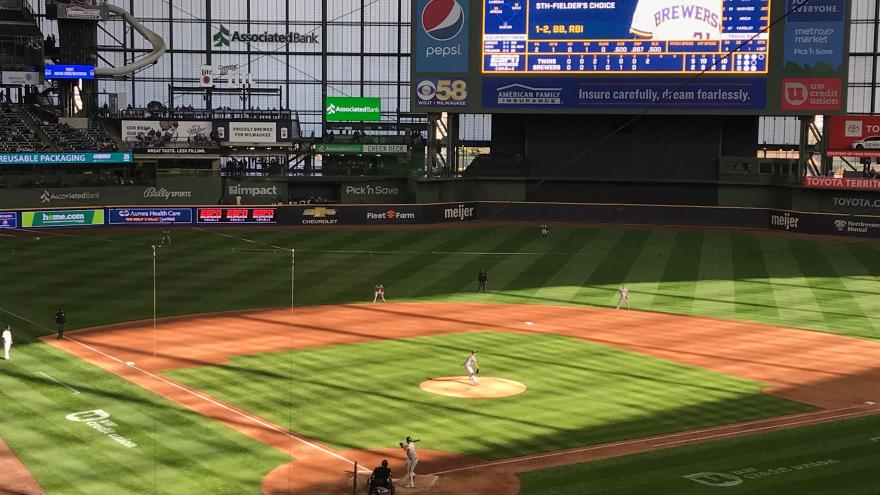 Brewers stars Christian Yelich and Kolten Wong showed how pumped they were to start the season with some pregame tweets to fans.

Ahead of the game, the team honored the late Hank Aaron and former greats who passed away this year.

Christian Yelich and the Brewers showed signs this spring that they'll bounce back from the slump that engulfed virtually their entire lineup last year.

The Brewers opened up the 2021-22 season and American Family Field to a sold out crowd on April 1.

Milwaukee showed off their elite defensive prowess in the opening inning, shutting out the Twins with help from this incredible play by shortstop, Luis Urias.

After a quiet first inning from both squads, the Crew's bats lit up in the second with hits from right fielder Avi Garcia and third baseman Travis Shaw.

Unfortunately, the Brewer's couldn't capitalize with two men on base, leaving the game scoreless after two innings complete.

After a slow start on both fronts, fans got an eventful third inning at American Family Field. The Twins struck first in the top of the third when Minnesota's Jake Cave scored on a wild pitch from Brewers pitcher Brandon Woodruff. Minnesota struck again when Gabe Kelper singled to center and drove in Miguel Sano to make it 2-0 heading into the bottom of the inning.

Milwaukee filled the bases in the bottom of the third but only managed to tally one run after a Travis Shaw walk scored in Kolten Wong.

The Twins extended their lead back to two in the fourth inning when a hit from Luis Arraez drove in Andrelton Simmons to make it 3-1.

Milwaukee loaded the bases again in the fifth inning but, just like in the third, only managed to drive in one run off an Omar Narvaez single to left field. The Twins held a 3-2 lead after five innings complete.

Minnesota grabbed two more runs on a massive Byron Buxton home run to center field to make it a 5-2 game in the seventh inning.

Orlando Arica delivered an Opening Day walk-off in the bottom of the tenth inning. Brewers came back big to win 6-5.

Lo Cain beats the tag, and the Brewers win 6-5 in the 10th! #ThisIsMyCrew | #MakeItMajor pic.twitter.com/Cr2eNjq7Bm

An #OpeningDay 18 months in the making and the @Brewers make it count. Heck of a win. pic.twitter.com/c2fo9UHpqC