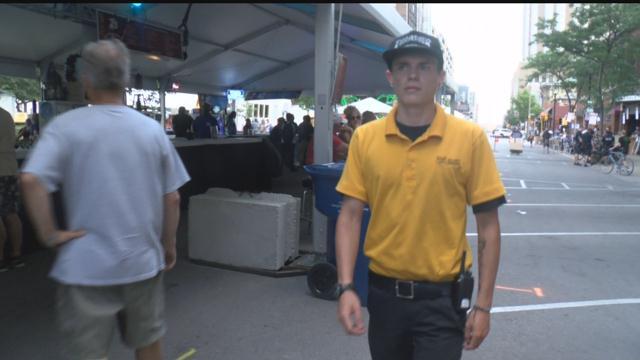 It has been one year since a Milwaukee man, 19, was badly hurt by a hit and run driver. Late at night on July 11, 2015, a car was driving near 59th and Clarke. The driver hit Chandler Long as he was on his skateboard heading home from work. The impact left Long badly hurt, with a broken jaw, broken joints and traumatic brain injury. He had at least one surgery to repair the damage, and spent more than a month in the hospital. Today, he's doing much better.

Long is working as a security guard at Bastille Days in downtown Milwaukee, which is the same thing he was doing the night he was hit. Chandler said he doesn't remember the crash itself, the moments before or the weeks after, but he's fine with that. The lasting effects are enough.

"The nerve damage, it doesn't let my right side move as much as my left," Long said. "I have trouble focusing, A-D-D."

All because of a hit and run driver.

"What happened was just devastating," said Shelly Long, Chandler's mother. "For it to happen to anybody, much less my own child, it's horrible."

Early on, the prognosis was grim, but after three days things started looking up.

"When he was cognitive, when he would open his eyes and he would actually look at you as you were talking to him, that was, you know, hold your hand and give you little squeezes," Shelly said.

Now, a year later, Chandler is back on his skateboard doing the best he can, all while a hit and driver is on the loose.