One Packers fan will leap into glory at Sunday's game 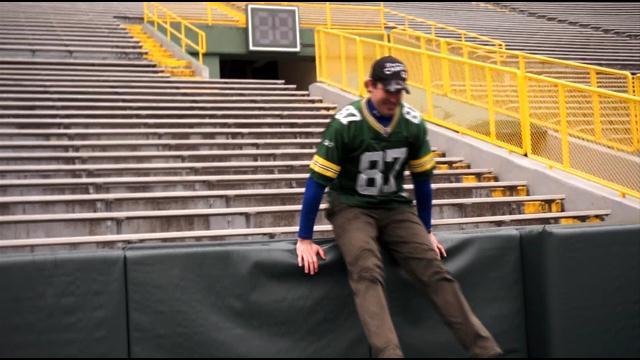 It's something you have seen players do when the score a touchdown at Lambeau Field, the Lambeau Leap.

\"I had a feeling about him when he caught is first pass, that guy is going to be good\", said Packers fan Brian Newell.

Brian Newell will leap into glory in front on 80,000 fans during Sunday's game against the Lions.

Newell entered the Ultimate Leap Sweepstakes which is co-sponsored by Pick N' Save, and Robert Haack Diamonds.

\"Just to go to Lambeau Field, one of the most historic stadiums in all of football, and do what these professional do, it's just something you should want to do\", said Brian Newell.

The leap is over 6 feet tall.

\"I was expecting it to be shorter, so it was a little imitating at first\", said Brian Newell.

\"I remembered when I scored my first touchdown playing semi-pro ball, and I just used that adrenaline, just jumped right with my feet, use your hands, and turn on the wall”, said Brian Newell.

Brian will also receive four club seats to the game, four VIP sideline passes, a game ball, and a packers jersey with his name on it.

The contest is co-sponsored by Pick N' Save, and Robert Haack diamonds.

The Green Bay Packers will play the Detroit Lions Sunday at Lambeau Field.