One on One with Kareem Abdul-Jabbar 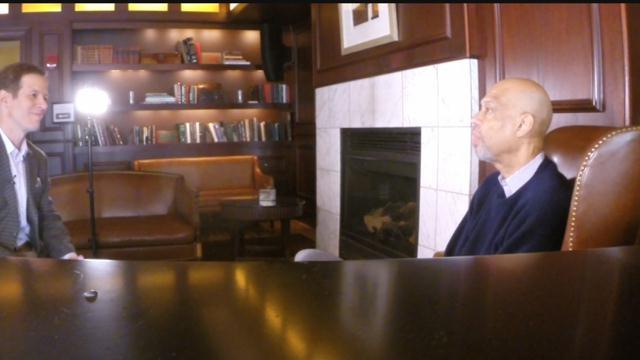 As a kid in the early 70s, Mike Strehlow spent many nights listening to Bucks games on a pocket radio under his pillow and reading the life story of a shy, emerging superstar known for his trademark skyhook.

Now, more than four decades later,  a chance to go one-on-one with one of greatest and most misunderstood athletes of all time to talk about basketball, books, and health.  After battling leukemia seven years ago, Kareem Abdul-Jabbar had heart surgery on his 68th birthday last April.

"I'm very happy to be alive. I warn everybody out there, get regular check-ups...especially when you pass that wonderful age of 50.like I have," said Kareem.

This smile, rarely seen during his 6 seasons with the bucks, appeared often during our wide-ranging conservation on topics such as his new HBO documentary, "Kareem: Minority of One."

"I hope people who watch my documentary get an understanding of what I went through and why I made the decisions that I made. I always felt that I was isolated, and that made me make decisions from a very lonely perspective.  I'm not doing that now.  I got good advice, and I'm pursuing the things that have meaning for me," said Kareem.

Like supporting education, cancer research speaking out on social and political issues and writing.

"Writing has always been something that I've enjoyed. It wasn't my first love.  I decided to try it after I retired and things have gone well for me," said Kareem.

Kareem's tenth book is his first novel, "Mycroft Holmes." It is a story about Sherlock Holmes' older and smarter brother.

This basketball superstar turned Renaissance man continues to reconnect with Milwaukee and the new look of the Bucks.

"It's nice to see that the spirit is coming back," said Kareem.

Whether its mingling with fans at a bucks tailgate party or posing for pictures at a Waukesha autograph signing, this legend who had a reputation for giving fans the cold shoulder, has warmed up to Wisconsin.

"Milwaukee is a special place to me.  It's a pleasure to be back here and this environment," said Kareemr.

"I just want to tell you how honored I personally feel to be on the same stage with Oscar and Kareem," Wes Edens, Bucks Co-owner said.

The Bucks ownership group is making a point of honoring the franchise's rich history as they 'build the future.'

"These are family members.  And it's so important to remember the past and to celebrate it cause it's the foundation for the future," Peter Feigin, Milwaukee Bucks President said.

"I think the new ownership really has the right idea."

The franchise-changing number one pick who put Milwaukee on the basketball map 46 years ago, is very much bullish on today's bucks.

"I think just the dramatic improvement is one indication that good things could be happening," Kareem said.