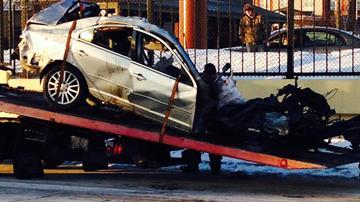 KENOSHA -- Several law enforcement jurisdictions have been called out to a fatal single vehicle accident near I-94 and Hwy. 50 in Kenosha.

The Kenosha County Sheriff's Department says the driver was driving on the off-ramp at a high rate of speed, and slammed into a pole. The engine was separated from the car. A source with the Kenosha Police Department says this was the worst accident he's seen in 19 years.

The Kenosha County Sheriff's Department reports the cause of the accident. The roads were clear and dry, no other vehicles were involved, and there were no skid marks indicating the driver never tried to stop.

According to the Kenosha County Sheriff's Department, the person driving the vehicle does not match the description of the vehicle's owner.