One dead, five injured in overnight shootings in Milwaukee 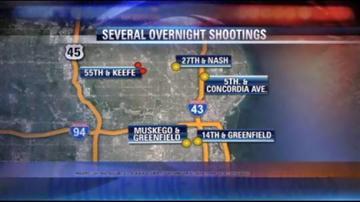 MILWAUKEE -- Milwaukee police are busy investigating five shootings that happened in the city overnight, including one homicide.

A 48-year-old man was found with a gunshot wound near 5th and Concordia just after 11 p.m. Tuesday. He died at the scene. No suspects are in custody and police are working to find a motive.

Five others were injured in gunfire within two hours of one another just before the fatal shooting.

A 55-year-old man was shot while sitting in his home near 14th and Greenfield just after 9 p.m.