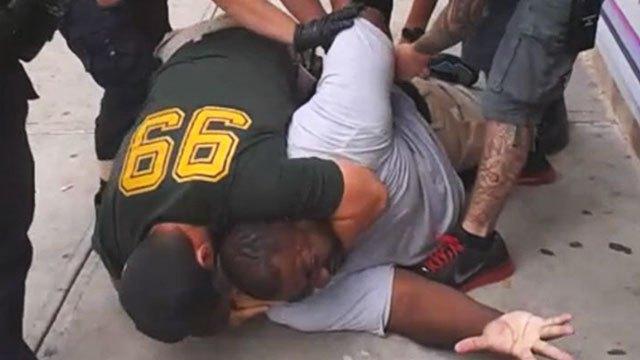 In an op-ed for TIME the Kentucky Republican, who's made racial politics a centerpiece in his pre-presidential campaign, referenced a 1967 speech by King on the \"two starkly different American experiences\" between blacks and whites.

Citing King's rhetoric, Paul added that \"the uneasy coexistence of the two Americas is brought to bear by the deaths of Eric Garner and Michael Brown.\"

Paul said that his trips last year to urban areas like Detroit, Atlanta and Chicago, as well as to Ferguson, Missouri, have highlighted what he often calls \"an undercurrent of unease,\" referring to racial tension that saw renewed attention last year after Brown and Garner were killed by white police officers.

Traveling to places with nontraditional GOP voters has been part of Paul's strategy to brand himself as a Republican willing to expand the party's appeal. He's been aggressive in working with Democrats to push criminal justice reform and calling for demilitarization of police forces.

\"We need to notice and be aware of the injustices embedded in our criminal system,\" he said in the op-ed, though noting that he believes \"most police are conscientious and want only to provide safety for us.\"

\"The blame,\" he continued, \"should be directed to the laws and the politicians who order police into untenable positions, that insist on 'taking down' someone for selling a couple of untaxed cigarettes.\"

\"I am optimistic, but peace will only come when those of us who have enjoyed the American Dream become more aware of those who are missing out on the Dream,\" he wrote in the op-ed. \"The future of our country will be secure when we break down the wall that separates us from 'the other America.'\"

Paul's itinerary in the past couple of years has also included speaking at historically black colleges, and he was the only elected Republican to address the National Urban League last summer.

When he met with local NAACP leaders in Ferguson in October, he said the GOP's \"biggest mistake\" in the past few decades has been not competing for African Americans' votes. And he sat down with Rev. Al Sharpton shortly after the midterm elections.

Though he's received some praise, he's faced skepticism over the authenticity of his outreach, especially when he's said there's been no \"bigger defender of minority rights in the Congress\" than himself. Rep. Barbara Lee said in a recent op-ed that he needs \"to do a much better job if he actually expects to win\" votes from African Americans.