High schools in Oak Creek found more and more students are vaping on campus, which is one of the many factors that pushed the city to regulate e-cigarettes.

Basically, where you can’t smoke traditional cigarettes, you can no longer smoke e-cigarettes either, like near schools, inside bars and work places. That includes vape shops, which could be bad for business.

“Our store only sells that, only sells tobacco products and so we kind of got caught in the cross fires because we can't vape inside anymore, which is unfortunate,” Employee at Smoke World Vape Tristan Larkin said.

The city of Oak Creek is concerned with the potential health risks. Flavored vaping juices and other nicotine products are luring teens in who see the trend as being harmless. Doctors say the adolescent brain is still developing and is vulnerable to nicotine addiction and potential toxic chemicals found in e-cigs.

“We wanted to protect those that don't indulge in that and they shouldn't be affected by someone else's behavior,” Mayor Bukiewicz said.

Wednesday, U.S. health officials say teenage use of e-cigarette has reached "epidemic" levels and are calling on the industry to address the problem or risk having their flavored products pulled off the market.

Senator Ron Johnson addressed this on his twitter Wednesday: 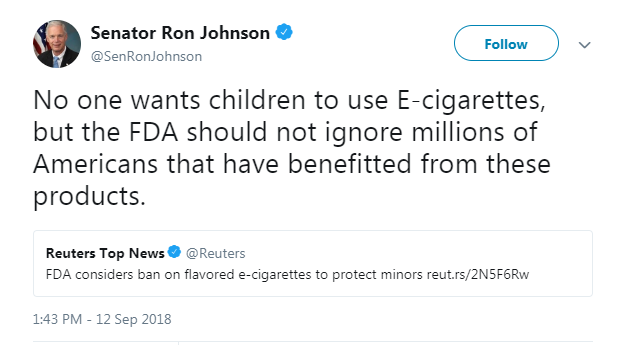 Some studies show that vaping can help adults quit smoking traditional cigarettes. Those in Oak Creek believe the tough regulations from the city could hurt the growing vaping community.

“I feel like the regulations will cut into it a little bit, but if you're serious about vaping and want to stay away from cigarettes, it's not going to stop them,” Employee at Smoke World Vape Ameena Eastin said.

The city of Oak Creek said they’ll see how people respond to the changes and as research and other things change, the will adapt too.